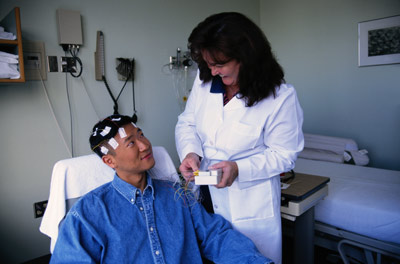 A patient prepares for an EEG.
Keith Brofsky/Photodisc/Getty Images

When you have one seizure, you don't necessarily have epilepsy or a seizure disorder. But you should head for the doctor's office, because testing may be able to determine the likelihood of a second episode by revealing abnormalities in the brain. Once you have one seizure, the chances have increased that you'll have another. Because people who suffer epileptic seizures may not know what's happening while they're occurring, it's usually helpful for the doctor if a witness to the seizure is present.

To diagnose epilepsy, doctors consider the types of seizures and the medical history of the patient. There are also blood tests to determine any underlying causes. But the most useful tools in diagnosing epilepsy are the tests that allow doctors to peek inside the brain.

The primary test is an electroencephalograph, or EEG, which allows the doctors to check for abnormal brain wave activity. To perform this test, doctors place electrodes at various points on the head and monitor the brain waves. If you've ever seen a television crime show with a lie detector, you know that the lie detector jerks violently when the person tells a lie. Similarly, a person's brain waves during a seizure are far more jagged, with higher peaks and valleys, than normal brain waves. Doctors may try to provoke a seizure during the exam; some methods include using flashing lights or asking the patient to come in on very little sleep. Both exhaustion and flashing lights are common seizure triggers.

Doctors may follow up an EEG with a brain scan, using an imaging device such as an MRI or a CT. This allows the doctor to see where any abnormalities in the brain may be; a lesion on the frontal lobe, for example, indicates frontal lobe epilepsy.

Doctors are using these tests to distinguish between other conditions that mimic epilepsy. Some of the conditions that include seizures which may resemble epileptic seizures include fainting, hypoglycemia, sleep apnea, an abnormal heart rhythm and panic attacks. Additionally, when an alcoholic or drug addict stops consuming those substances, the stress in the body could generate a seizure. Many infants and small children experience febrile seizures when they have a high fever, but they may not go on to have epilepsy.

One seizure that commonly leads to the misdiagnosis of epilepsy is a pseudoseizure. These incidents have the outward appearance of seizures, but the brain activity isn't the same as in people with epilepsy. These are more likely have an underlying psychological cause, like sexual abuse [sources: Wilner, Khamsi]. If patients suffering non-epileptic seizures take the drugs prescribed for epilepsy, they could damage their body. Pregnant women, for example, may be at a higher risk of delivering a baby with birth defects due to the medication [source: Khamsi].

Once doctors determine epilepsy, is there anything that can be done? As early as 400 B.C., Hippocrates was writing about epilepsy as a disease of the brain that should be treated with diet and drugs. However, in the interim years, people with epilepsy suffered through a host of more superstitious cures, including drinking a gladiator's blood or killing a dog and drinking its bile. Witnesses to a seizure were advised to urinate into a shoe and provide it as a beverage to the person having the seizure [source: Wilner].

Let's not focus on these primitive cures, which also included eating a pigeon. Rather, let's focus on the treatments used today. Go to the next page to find out if Hippocrates had it right.