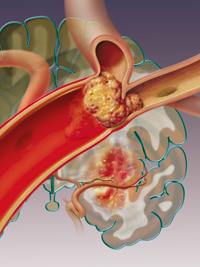 As funk band Sly and the Family Stone let us know, there are different strokes for different folks. When it comes to brain attacks, though, there are two types of strokes: ischemic and hemorrhagic.

Ischemic strokes are caused by blood clots and are far more common than the hemorrhagic variety, accounting for 80 percent of all strokes [source: Meadows]. The clot is either classified as a cerebral thrombosis or a cerebral embolism. Cerebral thrombosis, the more common cause of ischemic stroke, is caused by a blood clot formed in an artery in or leading to the brain, usually the result of fatty plaque build up in the arteries. This is similar to how a heart attack occurs, but a key difference is that the arteries in the brain are much smaller to begin with, so a clot doesn't have to be too big to cause problems. A cerebral embolism is caused by a wandering clot that makes its way to the brain, usually from the heart. It occurs more suddenly than a thrombosis, which builds up over time. In either case, the blood clot cuts off blood flow to the brain.

­Unlike other parts of the body, the brain doesn't have a backup system of oxygen or nutrients available to it, so it's extremely vulnerable once the blood gets cut off. Brain cells begin to die at a rate of 12 million cells per minute [source: Healy]. But it's not just the affected brain cells. In the case of an ischemic stroke, the dying cells release a chemical called glutamate, which inflames the surrounding cells. These cells might have been unaffected but the glutamate essentially leads these cells to commit suicide.

While hemorrhagic strokes are less common than the ischemic type, they also have a higher death rate because it's more difficult to treat them [source: Altman]. If the patient survives the hemorrhagic stroke, however, they may have a better long-term prognosis because the part of the brain that was under pressure can bounce back once the pressure is released. We'll learn more about how doctors go about treating these strokes in a later section.

More than half of all strokes could be prevented, primarily because so many risk factors can be controlled [source: Appel and Llinas]. Check out the next page to find out what you can do to keep your brain safe.