Why is coffee and a nap better than either by itself? 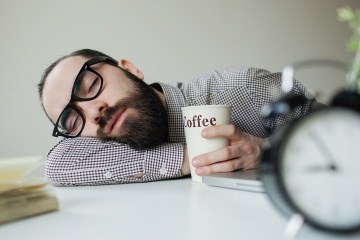 Although it might seem counterintuitive, it’s best to take a short nap right after you drink coffee for energy.
Katie_Martynova/iStock/Thinkstock

When you're fighting to stay awake, strong coffee or a nap can pep you up long enough to make it through your workday or safely get you through a long drive. A pair of studies suggests that combining the two just might give you a bigger boost than either can provide alone.

In 1997, researchers exposed three groups of people to a driving simulator. One group consumed 200 mg of caffeine before the experiment, while another group consumed the same amount of caffeine before also taking a 15-minute nap. A third group had neither caffeine nor a nap. While the caffeine group experienced 9 percent fewer driving-related incidents than the placebo group, the nap plus caffeine group experienced 34 percent fewer incidents than the placebo group [source: Reyner and Horne].

These results were reinforced in 2003 when researchers at Hiroshima University tested various methods to help subjects make it through that mid-afternoon slump. The study results suggested that 200 mg of caffeine plus a 20-minute nap were better at fighting sleepiness than a nap alone, exposure to bright light, washing your face or simply resting without actually sleeping [source: Hayashi et al].

Yet it may seem counterintuitive to try to combine a cuppa joe, known for its caffeine jolt, with a brief nap. After all, won't the caffeine prevent you from sleeping? Or if you do manage to doze off, will the groggy effects of napping negate the boost from the caffeine? Surprisingly, naps and caffeine might just be the perfect pair — but only if your timing is right. To maximize benefit, consume your coffee immediately before your nap, and limit your siesta to no more than 20 minutes.

To understand why this combination works, it's helpful to understand how both sleep and caffeine affect the body. When you're awake, a chemical called adenosine accumulates in the brain. This chemical not only slows down the nerve cells in your brain but also signals your body to go to sleep. As you sleep, your brain naturally clears the adenosine, allowing you to wake up alert and refreshed.

Caffeine has a similar effect on the brain: It binds to the adenosine receptors, helping to clear away sleep-inducing chemicals. The caffeine also speeds up nerve cell activity, which boosts blood sugar levels and heart rate, so you're primed and ready for action. If you drink coffee right before napping, you'll have time for about 20 minutes of shut-eye, as that's about how long the caffeine takes to bind with receptors in your brain and begin to work its magic [source: O'Connor].

Pulling Off the Perfect Power Nap
Why does caffeine keep you awake?
Image Gallery: Getting More Sleep

How Fatal Familial Insomnia Works
Why Some People Can't Sleep Without a Fan
Is sleep that important?