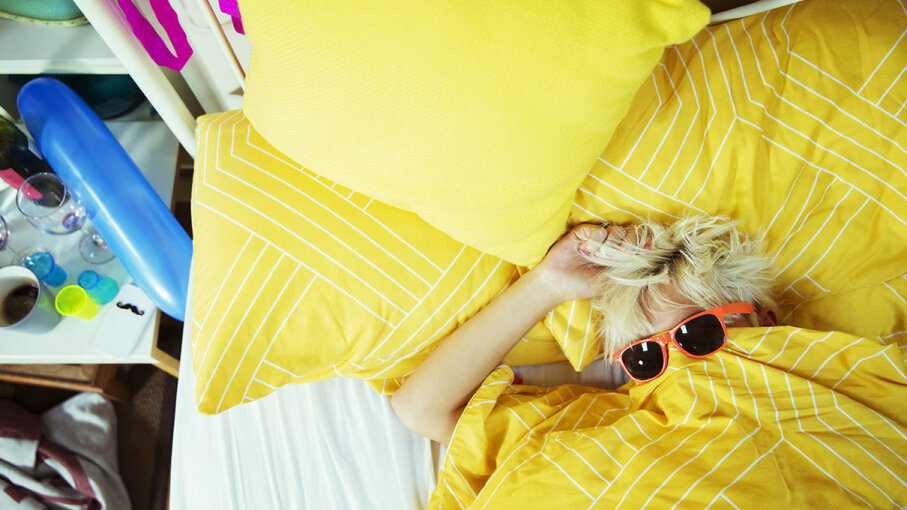 Sleeping in on the weekend? Social jet lag is linked with an increase in having heart disease. Caiaimage/Paul Bradbury/Getty Images

If you've ever flown across a half-dozen time zones in the same day, you know what jet lag feels like — fatigue, confusion, irritability and general crappiness. That's because rapidly leaping into a new time zone messes with your body's internal clock, which is critical for regulating the timing of just about all of your physiological functions. After a day or so, though, your body usually adjusts and you're back to normal.

Now sleep scientists are calling attention to a different kind of sleep disruption called "social jet lag," which may have longer-term consequences on your health. Social jet lag happens when you shift your sleeping patterns on weekends — going to bed later and waking up later, for instance — and then shift back on weekdays. The term was first coined in 2007 by chronobiologist (yup, that's a thing) Till Roenneberg, author of the book "Internal Time," to explain the negative effects of disrupting your body's natural sleep schedule.

In previousstudies over the past decade, sleep researchers have shown that for every hour you shift your sleep schedule on weekends, you increase your likelihood of also having heart disease, diabetes, depression and a host of other chronic health problems. But until now, it's been unclear whether the health issues associated of social jet lag are tied up with larger sleep problems. Maybe you sleep later and longer on the weekends just because you don't get enough sleep during the week and you're trying to catch up. Or you have chronic insomnia, and at least you can sleep it off on Saturdays and Sundays.

A new study from scientists at the Sleep and Health Research Program at the University of Arizona College of Medicine is the first to disentangle social jet lag from other factors like sleep duration, sleep quality and insomnia. When the researchers statistically canceled out all other sleep metrics, social jet lag alone accounted for an 11 percent increase in the likelihood of having heart disease and a 28 percent greater likelihood of being in "poor health."

Michael Grandner, director of the Sleep and Health Research Program, led the study, which analyzed data from nearly 1,000 detailed self-administered sleep questionnaires. (For fun, answer these seven questions to figure out if you have clinical insomnia!) The data backed up earlier studies linking social jet lag to a host of long-term health problems, but more importantly, it isolated social jet lag as a risk factor on its own, regardless of other sleep habits.

What's important to understand is that the study only proves that social jet lag is correlated with higher rates of heart disease and overall poor health, not that it's a direct cause. Grandner says it's very likely that heart health and sleep are a two-way street — people who have chronic health problems are more likely to have sleep disorders in general, so social jet lag could be both a product of bad health as well as a contributing factor.

"The biology that underpins biological rhythms — the genes that control how cells regulate their clocks — plays a key role in heart function and metabolism," says Grandner. "If sleep across the board is associated with heart function and these chronic diseases, it should be the case that the people who are more dysregulated in terms of their timing are also the people who are more likely to have heart disease."

Grandner says the dangers of social jet lag are relatively minor compared to the much more disruptive sleep patterns experienced by shift workers. There's even a name — Shift Work Disorder — for the host of health issues associated with irregularly switching from day to night shifts.

"There's a whole literature showing that shift work is a major risk factor for heart disease, diabetes, weight gain, chronic pain and all kinds of bad health outcomes," says Grandner. "There are so many systems in the body that depend on regulated rhythms to function right, and we're constantly knocking them off balance."

Grandner says that the rapidly growing body of research on sleep has established that good sleep habits are one of the big three predictors of overall health, right alongside diet and exercise.

The first advice that Grandner gives people who suffer from a sleep disorder is to "regularize your sleep schedule." That means going to bed and waking up at the same time every day, no matter if it's Thursday or Sunday. And don't fall victim to a work culture that rewards bad sleep habits.

"We call people 'hard workers' if they get into office super early and stay super late," says Grandner. "Imagine if we lived in a society where people who ate cheeseburgers were considered better than people who ate salads." Good point, but salads do kind of suck.

Now That's Cool
The social jet lag study is only one of hundreds of abstracts in the latest issue of SLEEP, the official publication of the Sleep Research Society. Check out other research into how late-night tweeting habits affect the next-day game performance of NBA players, or a comprehensive study of the napping habits of college students.