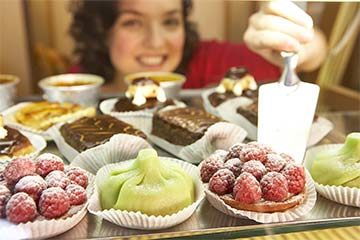 Why is it so hard to pass up a piece of cake or pastry?
RAYES/Digital Vision/Thinkstock

How many times have you heard someone lament, "Why is everything that tastes good bad for you?!" This is often said as the person is stuffing a doughnut into his or her mouth or grabbing another piece of chocolate. Alas, many sweet treats aren't great for your health, especially when consumed in large quantities. The culprit is often their sugar content. Eating large amounts of sugar can lead to obesity and Type 2 diabetes.

In 2015, the World Health Organization released a report stating that added sugars shouldn't comprise more than 10 percent of your daily calories, and less than 5 percent would be best. This is easier said than done. In the U.S., the U.K. and Spain, added sugars make up a whopping 16 percent of the average citizen's daily caloric intake. Children's diets are even worse; in Portugal, for example, added sugars comprise 25 percent of kids' daily calories [sources: FDA, United Nations].

Things didn't used to be this way. Research shows added-sugar consumption in America shot up more than 30 percent between 1977 and 2010 [source: Obesity Society]. Added sugars are those sugars that don't naturally occur in foods, but are added when foods are being processed, often to make a low-fat product taste better. The problem is we often don't realize we're consuming extra sugar. Sure, if we eat a candy bar we realize it has a lot of sugar, but added sugars are also found in seemingly healthy, or at least not-unhealthy, foods such as pasta sauce. Some experts claim our consumption of more sugar over the last few decades has caused many people to become addicted to the sweet stuff. Others say that's not true -- sugar isn't an addictive substance. But no one can argue that some folks have an awfully hard time passing on dessert, or limiting themselves to just one cookie. Let's see what experts say may be the reason behind this lack of resistance.

Can You Really Become Addicted to Sugar?

You go into the kitchen to get a glass of water. A pan of decadently-rich brownies on the counter catches your eye. You tell yourself you'll be good. You won't eat an entire brownie -- just a half. You make good on your promise, neatly cutting a square in two. But when you return to the kitchen just 15 minutes later, you quickly scarf down the other half. Another 30 minutes after that, you down a second brownie. Soon, you're shaving a piece off a third ...

Are you addicted to sugar? Perhaps. While there's no scientific consensus on whether or not sugar is truly an addictive substance like alcohol or nicotine, a lot of people do have trouble controlling their sugar intake. And one of the major signs of any addiction is loss of control. Further, indulging your sweet tooth releases opioids and dopamine into your bloodstream, which flood into your brain's "reward circuitry" and cause you to feel pleasure. This is also what would happen if you took drugs or downed an alcoholic beverage or two [source: Avena, Rada and Hoebel].

But this same brain circuitry can be stimulated by many things that aren't necessarily true addictions, including chowing down on fatty foods, compulsive shopping or over-exercising. These would be considered behavioral disorders rather than true addictions [source: Rettner]. One international team of scientists concluded that people can become addicted to eating but not to the chemical substances found in foods such as sugar. The researchers said the brain does not respond to nutrients in the same way it will to drugs like cocaine [source: University of Edinburgh].

Whether or not sugar is truly an addictive substance may not matter. The fact is that many people have an unhealthy relationship with sugar and sugary foods. They crave them, then eat far more of them than planned or is healthy. If this is happening to you, you should definitely work toward eliminating this behavior, whether it's a bad habit or an addiction. If you don't, it could affect your health, your relationships and your job. Just like a "real" addiction [source: Smith].

Why Sugar Consumption Is A Problem Today 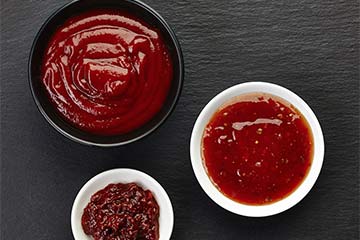 Some brands of barbecue sauce and ketchup are loaded with sugar.
Magone/iStock/Thinkstock

Food manufacturers weren't always dumping massive amounts of sugar into our food. This bad habit started around 1980, when fats were suddenly deemed verboten. With public health officials warning us against eating so much saturated fat and cholesterol, we began slashing our consumption of eggs, meat, full-fat dairy products and eggs. The food industry, in return, rolled out a whole host of low-fat and no-fat products (a la SnackWell's cookies). But if you take fats out of food, it doesn't taste very good. Fats give food flavor. So food manufacturers swapped fats with sugar [source: Gunnars].

Before long, Americans, as well as people in other parts of the world, were ingesting horrendously high amounts of added sugars. How much? As of 2014, Americans were consuming 22 to 30 teaspoons (88 to 120 grams) of sugar per day [source: American Heart Association]. (The organization recommends a daily maximum of 6 teaspoons for women and 9 for men.) To hide this fact, the food industry gave the sugar it added all sorts of creative names, such as evaporated cane juice, dextrose, malt syrup, agave nectar and brown rice syrup.

With more sugar in everything we were eating and drinking, our taste buds naturally begin to crave sweetness. We also became more likely to reach for the M&Ms because of the spike-and-crash phenomenon. When we eat refined sugar and starches, they flood into our bloodstream very quickly -- more quickly than many other foods. This causes a glucose (sugar) spike. When our glucose spikes, our bodies produce the hormone insulin to divert the sugar from our bloodstream into our cells. The increased insulin tells our body to form fat and to release more cortisol (a stress hormone that increases inflammation) and even adrenaline, causing a sort of sugar high, which is pleasurable. But the sugar high is temporary; soon there's a crash, as our blood sugar levels return to normal. Unfortunately, our bodies then want more sugar to sustain the energy and high. It becomes a vicious cycle [sources: Eliaz, Thompson].

Although we've been ingesting massive quantities of added sugars for several decades now, hope is on the horizon. The Food and Drug Administration is proposing that the amount of added sugars be included on the "nutrition facts" label found on most packaged foods in the U.S. and that portion sizes reflect reality. No one really eats half a frozen dinner or drinks half of a 20-ounce bottle of soda – though the nutrition labels sometimes pretend that people do. Ideally, the food industry will take some responsibility, too, and begin scaling back on the added sugars -- and not substitute them with something else we'll later discover is detrimental to our health.

How to Beat Sugar Addiction

Think you'll never be able to pass on the birthday cake, or indulge in the proper half-cup-serving-size of ice cream? Actually, there's reason to be positive about kicking your sugar addiction. Doing so is not nearly as daunting as it may seem. First, it's important to know that you're not alone. People around the world are eating more sugar than ever before. That's because the food industry has been adding more of it to various products over the years. So even if you eat a relatively healthy diet with limited desserts, you're still likely eating more sugar than in the past -- and therefore your palate has become conditioned to prefer sweeter foods and beverages. But this also means you can also retrain your palate to prefer less-sweet foods by removing sugar from your diet, little by little [source: Pagoto].

How? Do you add three packets of sugar to your coffee? Switch to two. Once two starts to taste good, drop down to one. Next time dessert is served, split yours with someone at the table. If you guzzle a soda every day at noon, swap it out with water one of those days. Next time you're at the grocery store, buy a granola bar that has fewer grams of sugar per serving than your current favorite.

It's not just about eating less sugar, though. Exercise, for example, often erases food cravings across the board. A 2013 study found that if you regularly keep moving, your brain gets less excited by images of ooey, gooey, highly-caloric foods. Eating more protein- and fiber-rich foods also helps you kick the sugar habit, as these foods keep you fuller longer. They also don't make your blood-sugar levels spike and then crash as sugary foods do; when such spikes and crashes happen, you're more likely to crave even more sugar. You can also try swapping out a sugary snack for a non-sugary one -- say, a handful of nuts instead of a candy bar -- or simply wait five or 10 minutes when your sweet tooth starts wailing to see if it will stop [sources: Barclay, Killgore, Smith]. Now, was that so bad?

Everyone knows cake, cookies and candy contain a lot of sugar. But there are a fair number of foods and food products that appear reasonably healthy, yet are (or may be) loaded with added sugar. A few examples: barbecue sauce, ketchup, pasta sauce, baked beans and reduced-fat salad dressing. Even flavored coffees and bread (bread!) can be filled with added sugar [source: Smith].

Thankfully, I'm not addicted to sugar, although I do love a good piece of chocolate. But salt? That's another story. Pass the chips, please.

How Sleep Deprivation Works
What Are the Odds You've Met a Psychopath?
How does the sense of smell work?