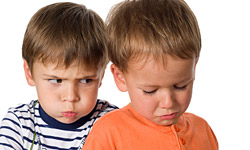 It's one thing to see bullying on TV, but quite another when it's your little ones getting picked on.
©iStockphoto.com/Olga Solovei

Most parents probably carry memories of being bullied when they were kids. If not, they have at least formed notions from movies and other media of how bullying generally manifests. But when it comes to the experiences of your own children, bullying can be complicated and painful for them and for you, especially if you don't have the proper tools to handle it.

If you have grade-schoolers who may be having trouble with a bully, these 10 steps can help guide your course of action.

Parents are often blissfully unaware that anything is amiss in their grade-schoolers' lives. Victims of bullying often feel frightened, powerless or ashamed by the attacks -- whether physical, verbal or relational -- so they're not eager to discuss them with people. Other times, it might be hard to distinguish between simple bouts of teasing and serious bullying, especially in cases of relational bullying, where hurtful social interactions include spreading rumors, excluding members of a friend group, or sharing secrets told in confidence. In all types of bullying, kids can choose to discuss it with their parents or keep it to themselves.

There are lots of signs you should be alert for, however, such as truancy, changes in appetite, extra requests for money, torn clothing and falling grades. Also look out for increased stress and subsequent health issues, uncharacteristic despondency, decreased physical and social activity, and increased apprehension and moodiness. If symptoms like these seem frequent, sit your kids down to discuss what's causing the upheaval.

It's important to monitor your grade-schoolers' online habits to help prevent cyberbullying. Make sure they're well-informed when it comes to proper online etiquette and preferred privacy practices. Kids should never have computers in their rooms, and you should always have the ability to check up on their activities. 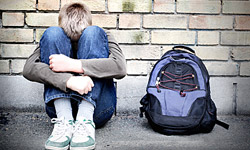 Bullying can make children feel isolated and hopeless. When you find out about bullying, convince your kids the situation is salvageable.
©iStockphoto.com/Mikael Damkier

Assure your grade-schoolers that you will help them work this out, and make sure they understand the bullying is not their fault. Being the victim of a bully can be really damaging psychologically, so you'll want to work to boost their self esteem while delivering comforting messages of understanding and caring.

Make sure other adults in your children's lives reinforce these messages, as well as the preferred methods for dealing with bullies that we'll cover in the rest of this article. Retaliatory violence or verbal attacks only act as fuel to the fire -- and make your children one step away from becoming bullies themselves.

Talk to a counselor, teacher, coach or someone else at your children's school who can advise them and help shield them. For example, if a bully tends to strike in an out-of-the-way stairwell (bullying increases as adult supervision decreases), the school can post a teacher there between classes to keep an eye out for trouble. School personnel can also work with bullies to try to get them to understand the consequences of their actions and tutor them in areas such as anger management and social skills.

The people you recruit can serve as confidants for your kids if they're not always comfortable discussing painful topics with you. Just talking about bullying incidents can be a big relief, as opposed to keeping all those negative thoughts and emotions bottled up inside. 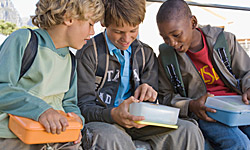 It's safest when kids stick with their friends.
Jupiterimages/Pixland/Thinkstock

When it comes to bullies, one of the best suggestions is to simply avoid them whenever possible. Discuss the idea of your children choosing a new route home from school, for example, so they aren't on the same path as their antagonist. Or tell them to make sure they aren't positioned near their bully in a busy lunch line. The fewer adults there are around, the greater the opportunity there is for bullying.

It's also a good plan for your kids to stick with a friend so they're not alone in situations where the bully might approach them. The old adage "strength in numbers" applies here, since bullies are often less likely to stir the waters if they're outnumbered or bullying in front of an unappreciative audience. Teach your children and their friends how to intervene properly when bullying begins -- by speaking up, for example, or going to an adult to help.

If your children aren't able to avoid their bullying peers, advise them to keep their anger in check during a confrontation and walk away from the bullies rather than antagonize them. The motivation for bullying is frequently the desire to see a victim react negatively. If your children can deny them this reaction, there's a better chance the bullies will leave them alone in the future.

Also, encourage your kids to consider how their body language influences the situation. Are they standing tall in the face of a bully, head held high? If not, that could be a factor that's egging on their attackers. Assuming a bold posture (even if they're nervous and it's just for show) is not a guaranteed fix by any means, but it could certainly make a difference. 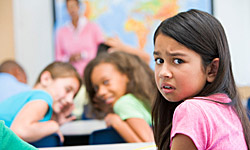 Bullies often aim, and sometimes succeed, in ending friendships or otherwise alienating their victims. If your children have been the victim of bullying, they can end up feeling lonely and isolated.

To help them work out any pent-up emotions, consider signing them up for lessons or encouraging them to join clubs and other social organizations. Not only will this help distract them and buoy their spirits, they'll be around potential new friends and hopefully develop fresh, healthier relationships with peers.

Make sure your children's school district has anti-bullying policies in place, and if it doesn't, consider starting a petition or seeking an audience with school board members. Just keep in mind that it's important to make sure everyone at the school is onboard, from the principal on down. You need big buy-in to affect a shift away from a bully-tolerant mentality.

The goal is to increase awareness both among the staff and the students. Everyone needs to be educated on the disastrous impact bullying can have -- and that impact is not just on the victim. Bullying negatively affects those around the victim, and the bullies themselves often suffer problems later in life. An estimated 1-in-4 grade school bullies have criminal records before they hit 30 [source: KidsHealth.org]. 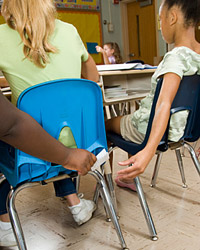 Teachers need to be vigilant when it comes to spotting potential acts of bullying, so it's helpful to offer them training geared toward the task.
iStockphoto/Thinkstock

In order to educate students and staff at your kids' school, it's a good strategy to implement training sessions and other activities to learn about bullying. Conduct role-playing sessions, for example, followed by group discussions on how to recognize, react to, and report bullying behavior. Survey student opinions and experiences with bullying to help pinpoint problem areas, which can serve as starting points for customized training in conflict resolution and interpersonal interactions.

Keep in mind what we said about teacher-to-bully ratios, too. More teachers monitoring students means less bullying, so perhaps during activities like recess, field trips and assemblies, teachers can step up the vigilance, by paying careful attention to known bullies and watching out for relational bullying. Schools can also offer special instruction if a teacher is dealing with some particularly nasty bullying. Address the issue of school bullying flexibly, and from as many angles as possible.

Changing schools is a bit more drastic, and might not be an option depending on a family's situation, but it's a backup plan if you're desperate to escape a persistent bully. You can also consider homeschooling your elementary-aged kids or enrolling them in online schooling.

In many cases, a change this extreme probably isn't ideal -- your kids would probably wind up leaving behind friends and teachers who do value them -- but at the same time, bullying can cause real and lasting harm, and protecting your children is a priority.

We've all heard news stories about kids hurting or killing themselves and others because bullying persisted past what they could emotionally handle. If you feel a situation has the potential to escalate to dangerous levels, trust that instinct; often parents never see the signs in time.

Once you're aware there's an issue with bullying, start keeping track of everything negative that transpires, whether it's physical incidents or virtual ones. Then contact your local law enforcement officials with the evidence. It's not a guarantee -- laws regarding bullying vary widely from state to state -- but they may be able to take action. 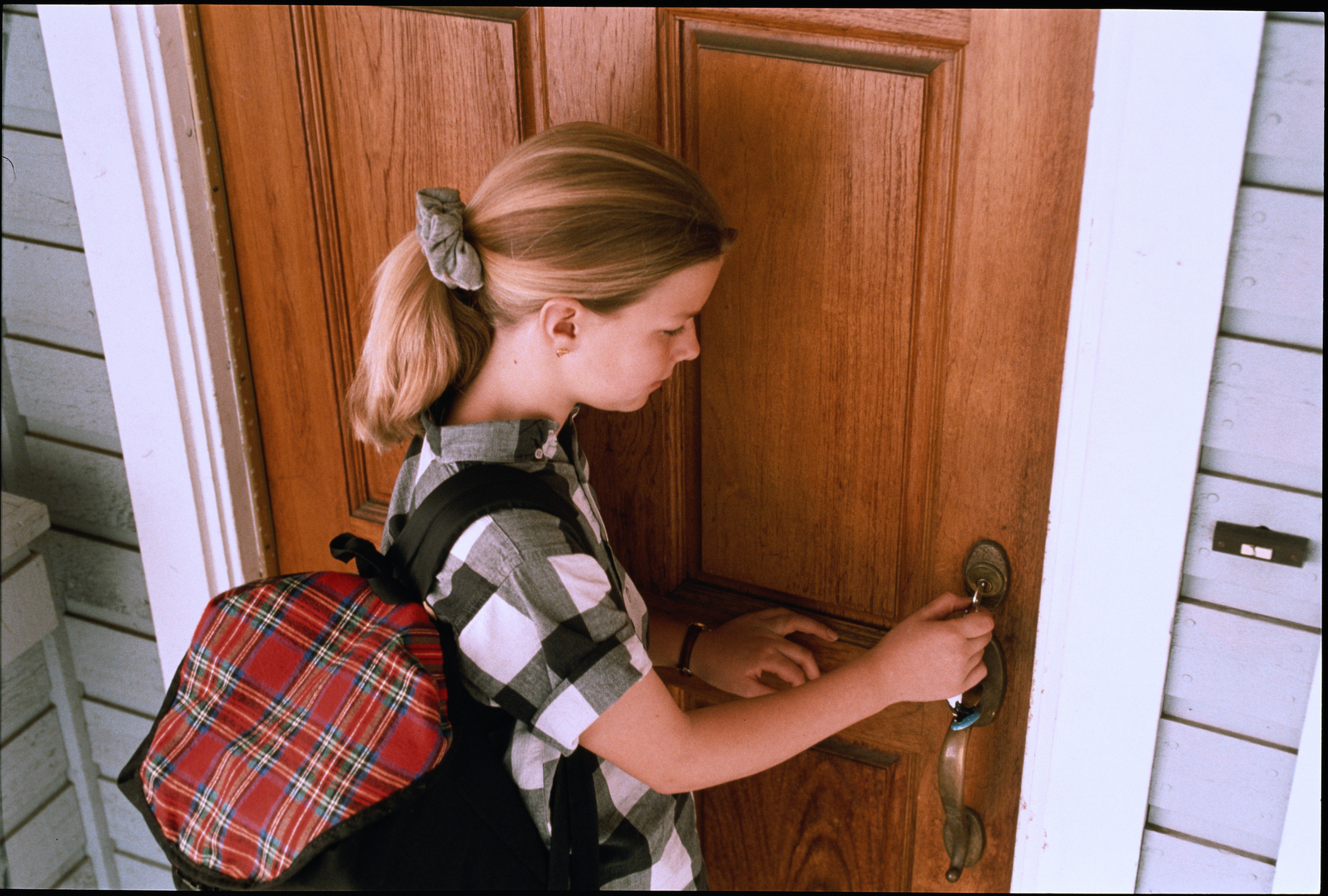 Today's latchkey kids are likelier to come from low-income families than high-income ones — a flip from the early 2000s. HowStuffWorks explains why.

Despite What You Think, Today's Teens Are Better Adjusted Than Gen X Teens
How Empathy Benefits Children, But Could Be Bad for Parental Health
What's the effect of children's exposure to actual violence as victims or as witnesses?