How can you avoid getting sick when your kids are? 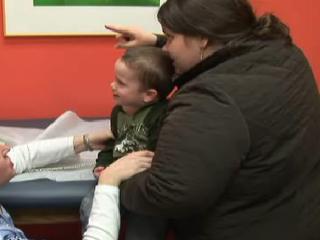 Viruses spread quickly, yet it’s possible to treat sick kids while avoid getting sick as well. If you boost your immune system, keep the house germ-free, and eat and drink properly, you can minimize your chances of catching the illness.

First stop the flow of germs by constantly washing your hands and your sick child’s hands. Encourage your sick child not to touch common household objects, such as doorknobs, which will spread his germs to others. Let the sick child have separate kitchen utensils and bathroom towels until he recovers. In addition, use tissues, instead of hands, whenever possible to shield a cough or sneeze, making sure to discard used tissues immediately. Furthermore don’t share food or drinks with a sick child since viruses can be transferred via saliva as well.

Certain foods and teas are naturally beneficial for boosting the immune system and fighting infection. Chicken soup, for example, reduces the mucus in your nose and relives congestion, plus it contains plenty of healthy vitamin-rich vegetables. Another example of an effective remedy for fighting colds, nausea and vomiting is ginger tea. Place one teaspoon of grated ginger root into a cup of hot water, wait a few minutes and drink. In general, staying hydrated, deliberately eating nutritious foods and getting enough quality sleep can prevent illness. A study by the Archives of Internal Medicine says that those who get less than seven hours of sleep a night triple their chances of catching a cold.

It’s important to separate the sick child from the rest of the household, keeping the germs contained in one place. Make your sick child’s room as child-friendly as possible so he or she doesn’t feel punished for being sick. Be sure to sanitize the toys he plays with as soon as he’s done.

Could washing dishes by hand lead to fewer allergies?
10 Ways Not to Catch Your Kid's Cold
How can I help protect my family from catching colds?

How can you tell if your child is a prodigy?
Ultimate Guide to Halloween Safety
Real Parents Offer You Their Best Advice