Rockabye Baby in a Smart Crib From Ford

Browse the article Rockabye Baby in a Smart Crib From Ford 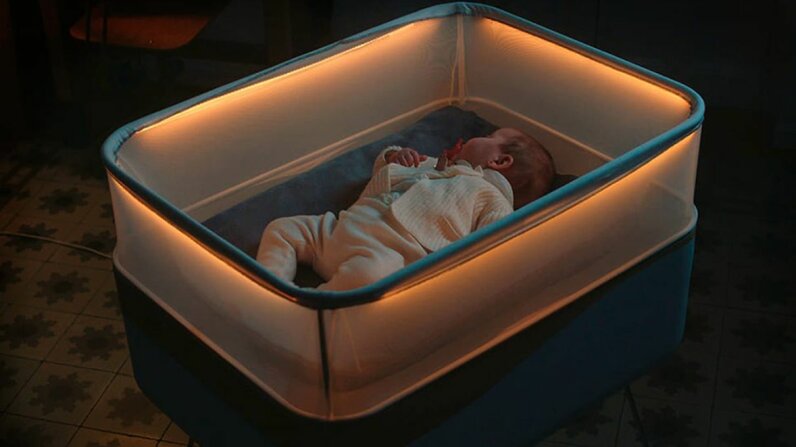 Ever since Henry Ford rolled the first Model T off the assembly line in 1913, parents of newborns have not only relied on cars to get their families around, they've probably also used the family car to help get their cranky little urchins to sleep in the middle of the night. Now, moms and dads can put away the car keys and get some much-needed shut-eye thanks to the Ford Motor Company. Engineers have designed a crib that simulates the motion, lights and sounds of a night-time car journey.

The Max Motor Dreams looks like a typical baby crib but unlike standard cribs, this one simulates the hum of a car motor, the swaying of a moving vehicle and the flash of streetlights blazing across a windshield. According to Ford, Max Motor Dreams is "a crib that conveys the same feeling of traveling by car, helping your baby sleep as easy and as fast as when traveling in a Ford."

"After many years of talking to mums and dads, we know that parents of newborns are often desperate for just one good night's sleep," Max Motor Dreams designer Alejandro López Bravo said in a statement on Ford's website. Bravo works with Spanish creative studio Espada y Santa Cruz, the company that designed the crib. "While a quick drive in the family car can work wonders in getting baby off to sleep, the poor old parents still have to be awake and alert at the wheel."

Parents control the new crib using a smartphone app that creates a "nocturnal driving experience" for their little one. Engineers placed a series of small lights around the bottom to create a soft glow as if a car is passing under street lights. The crib itself gently rocks to the rumble of a make-believe engine. Parents can even use the phone app to record the sounds and movements of a drive their baby "approves" and send it to the crib, which can then actually mimic that specific route.

Parents across the globe are probably wondering where they can get their hands on one of these "smart cribs." Well that's the catch. It's currently just a concept from Ford, and not available at stores — at least not yet. But one set of lucky parents will take home the crib in a Ford-sponsored raffle. It's part of an ad campaign to promote its Max line of cars. If demand is high enough, though, Ford says it would consider putting the crib into production and making it available for sale.

The Max Motor Dreams is just one of a series of products including rocking cribs, rock 'n' plays, and motion-generating devices, among others, designed to get newborns to doze off. Industrial designer Yves Behar and pediatrician Dr. Harvey Karp joined forces with MIT to create the Snoo in late 2016. It also rocks babies to sleep using white noise and slow motion. But do these smart sleeping devices even work? Is there something special about a moving car that can make an infant nod off? Parents say there is, but the science is scant.

"Just about every parent I know, including me, has used the driving around the neighborhood trick to get a baby to fall asleep," says Dr. Ari Brown, a pediatrician based in Austin, Texas. "Yes, it works, but I don't really know why. Perhaps in their fetal development they are used to constant motion while being inside the womb — but that is total conjecture — there are no studies that I can definitively point to that proves the 'why' since we cannot ask the baby his opinion!"

However, studies suggest that gentle rocking does lull a child to sleep. In 2011, researchers at the University of Geneva found that rocking boosted certain types of sleep-related brainwaves. Those brainwaves are generated by the side-to-side motion created by a moving vehicle, swaying hammock, or in this case, a crib. So, driving at 60 miles per hour (96.5 kilometers per hour) down a highway is a lot like being rocked in a mother's arms.

As for the Max Motor Dreams, pediatrician Brown says go ahead and try it, if you can. "I can envision other car companies putting their logos on cribs as well," he says. "It might become a very trendy parenting purchase. But, I'm not sure it is any better than what is already on the market."

Now That's Interesting
Newborns sleep up to 16 hours a day, but as parents know, it's not all at one time. Babies will sleep for one to two hours at a time during the night. As for mom and dad, well, you don't get a whole lot of sleep. But you didn't need us to tell you that.