Have scientists discovered what causes SIDS? 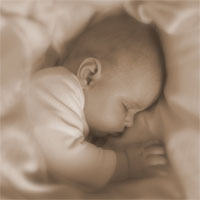 Each year in the United States, almost 2,500 seemingly healthy babies die of sudden infant death syndrome, or SIDS, before they're six months old. Accurate global numbers are hard to come by because of the nature of SIDS: It's not diagnosed by its symptoms; it's diagnosed by the absence of any other possible explanation for the death. A SIDS death happens while a baby is asleep. It's the syndrome that is sometimes called "crib death."

Until recently, all science knew for sure about SIDS was that certain environmental factors increased an infant's risk of suddenly dying, including exposure to alcohol and drugs while in the womb, premature birth, low birth weight, exposure to second-hand smoke after birth, and sleeping on his or her belly. It's this last one that has seemed to play the greatest role in SIDS, and a highly publicized campaign about a decade ago got many parents to put their infants to sleep on their backs, which quickly decreased the SIDS rate by 40 to 50 percent.

There are many theories about why stomach-sleeping could cause an infant to stop breathing. Perhaps the infant's jaw is compressed by the position of his or her head, in turn compressing the air pathway and making it difficult to breathe. Or perhaps an air-pocket forms in soft bedding, and the infant ends up breathing in his or her own air, leading to a build-up of carbon dioxide in the body. But in both of these cases, the infant's brain should send a signal to wake up and start crying because something's wrong. So maybe a pre-existing anatomical factor prevents the brain from sending that signal.

Researchers have been looking for proof of this anatomical risk factor for decades. Without it, SIDS is truly just a random, unpredictable death that leaves parents forever wondering if they did something wrong. In an amazing turn for SIDS research, a group of scientists has published the first study that draws a conclusive link between anatomy and SIDS risk. It's in the brain stem.

According to results published in November's Journal of the American Medical Association, it's possible that at least half of SIDS deaths are related to a defect in the way the brain stem handles a neurotransmitter called serotonin. The brain stem is the part of the brain that connects to the spinal cord and controls unconscious processes like breathing and heart rhythm, and serotonin is part of this control system.

Researchers gathered the autopsy data of 31 infants who died of SIDS and 10 infants who died of other causes between 1997 and 2005. In 30 of the 31 SIDS cases, the data showed a significant number of defective serotonin neurons -- nerve cells responsible for producing and processing serotonin -- in tissue from the part of the brain stem called the medulla. The number of defective serotonin neurons in the SIDS infants was twice that in the non-SIDS infants. Without effective neurons to create serotonin pathways in the brain, the signals carried by that serotonin are lost.

Combined with an environmental risk factor such as stomach sleeping or a lung infection, an infant who has this inherent anatomical risk factor is more likely to experience SIDS than an infant whose brain stem processes serotonin normally. If neurons in an infant's brain can't properly process serotonin, the brain can't effectively send the "Wake up!" signal when the infant experiences low oxygen levels. The authors of the study believe this defect is most likely genetic. While the results of this study do not show whether or not SIDS can be prevented, the study is a starting point for finding diagnostic techniques that could possibly pinpoint infants who are at high risk for the syndrome. Right now, the defective neurons can only be found during autopsy.

The Web site KidsHealth.org offers a list of tips to help reduce the risk of SIDS, including:

For more information on SIDS research and check out the links on the following page.