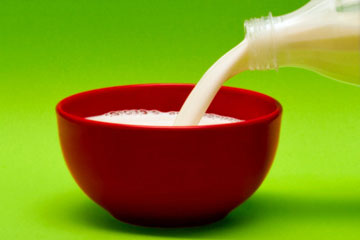 Lack of calcium in youth can lead to osteoporosis later in life.
iStockphoto/Thinkstock

Only 13.5 percent of girls and 36.3 percent of boys age 12 to 19 in the United States get the recommended daily amount (RDA) of calcium, placing them at serious risk for osteoporosis and other bone diseases, according to statistics from the U.S. Department of Agriculture. Because nearly 90 percent of adult bone mass is established by the end of this age range, the nation's youth stand in the midst of a calcium crisis.

"Osteoporosis is a pediatric disease with geriatric consequences," said Duane Alexander, M.D., director of the National Institute of Child Health and Human Development (NICHD), sponsor of the MILK MATTERS calcium education campaign. "Preventing this and other bone diseases begins in childhood. With low calcium intake levels during these important bone growth periods, today's children and teens are certain to face a serious public health problem in the future."

The health risks related to low calcium intake are not just years away, explained Dr. Alexander. Children are drinking more soft drinks and more non-citrus drinks than they used to; meanwhile, milk consumption has dropped. The number of fractures among children and young adults has increased, probably due to lower intakes of calcium. Pediatricians are also seeing the re-emergence of rickets, a bone disease that results from low levels of vitamin D. Rickets became almost nonexistent after vitamin D was added to milk in the 1950s, but is now appearing at greater rates around the country.

But the major effects of this crisis are yet to come.

"As these children get older, this calcium crisis will become more serious as the population starts to show its highest rate of osteoporosis and other bone health problems in our nation's history," Dr. Alexander said. "But we need to remember that this is a preventable and "correctable" public health problem."

Getting children to pay attention to their calcium needs is a challenge for scientists and educators, he adds. For this reason, the NICHD has expanded its Milk Matters campaign and Web site to speak directly to children and their parents about calcium.

Previously, the NICHD developed educational materials that are used primarily by educators, nurses, and physicians to convey the importance of adequate calcium consumption among children and teens. Now, NICHD has expanded its Web site to give children and their parents more direct access to the information and will be adding games and other interactive content specifically for kids.

On the next page, learn more about Milk Matters.

The Institute's Milk Matters campaign stresses low-fat or fat-free milk as the preferred source of dietary calcium because:

The NICHD bases its recommendations on the 1994 National Institutes of Health (NIH) Consensus Development Conference on Optimal Calcium Intake, and on additional guidance from the 2000 NIH Consensus Development Conference on Osteoporosis Prevention, Diagnosis, and Therapy. "If you don't drink milk, it's important to get calcium from other sources, like other dairy products, green leafy vegetables, and foods with added calcium," explained Dr. Alexander.

The Milk Matters campaign offers a variety of free materials on the importance of calcium in the diets of children and teens. Brochures, booklets, fact sheets, coloring books, stickers, and posters are among those items available on its recently revamped Web site, most in both English and Spanish. The Milk Matters web site, www.nichd.nih.gov/milkmatters, is also an excellent source for information on calcium for health care professionals.

The NICHD also supports research and encourages outreach to better understand and promote the importance of calcium in Americans' diets.

For more information on the Milk Matters campaign, contact the NICHD Clearinghouse at 1-800-370-2943, or visit the campaign Web site at www.nichd.nih.gov/milkmatters.

Why Don't More Babies Get Mom's Last Name?
Is There Science to Back Up the Stereotypes About Only Children?
What Your Pediatrician Wishes You Knew