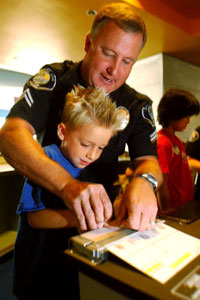 The 1996 introduction of the AMBER Alert missing-child system drew increased attention to an already startling problem: In the United States alone, a child is reported missing every 40 seconds [source: KIDSAFE]. That's more than 2,000 missing children every day in a single country. Groups all over the world are introducing measures to try to address this issue, and one program that has recently gained widespread attention is the child ID.

The state of Indiana is attempting to distribute one to all of its school-age children in 2009; sheriff's departments in states like Florida and Alabama have provided hundreds of thousands of child ID kits to elementary school students; and in 2008, Denver Broncos player Marcus Thomas sponsored a child ID for every kindergartener in Colorado [source: NCIP].

What exactly is this "child ID"? It's not an implant (like the child microchip that has garnered controversial coverage) or an external, LoJack-type tracking device, both of which have privacy activists up in arms. It's really just a collection of information, and it's becoming a pretty popular method of preparing for the worst.

Of course, privacy activists may take issue with some types of child IDs, too. It all depends on how they're set up. In this article, we'll find out what a child ID involves. We'll see how it's used and why it might be beneficial, what information it includes, where you can get one and what to look for (and avoid) in a child ID.

To begin with, a child ID is one of those things you have in the hopes you'll never use it, because it's intended to be useful when a child disappears. Understanding exactly how a child ID can be useful requires knowing what happens when a child is first reported missing.