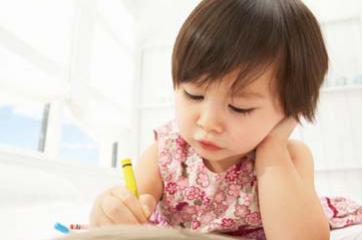 For a child with color vision deficiency, crayons without wrappers are useless.
James Woodson/Digital Vision/Getty Images

Justin works in his reading workbook. The directions say to draw lines to the red balls. Too bad all the balls look green to Justin. He guesses and gets many of them wrong.

Haley's teacher writes the vocabulary words in orange on a green chalkboard. Haley can't distinguish most of the letters against the background. Embarrassed, she doesn't copy the words and gets an F on the vocabulary test.

Andy usually loves to read aloud in class. Today, however he balks when the teacher calls on him and claims he can't read. The story in the reader is printed in purple with a blue background.

For these kids, red, orange, yellow and green are simply different names for the same color. Approximately 10 percent of boys are colorblind, while only half of 1 percent of girls lack full color vision. This genetic deficiency usually passes from mother to son in alternate generations. You might think someone who is colorblind only sees in black or white — like watching an old black-and-white movie on TV. But that's not true. It's extremely rare to be completely colorblind. Most kids who are colorblind can see color. They just don't see the same colors as the rest of us.

Two types of cells in the eye detect light — the cones and the rods. Cones are responsible for our color vision. They are sensitive to red, green and blue wavelength light. "Colorblind kids lack some of one, two or all three of these cones," says Scott Steidl, M.D., director of the vitreoretinal service at the University of Maryland School of Medicine. Those who see every color of the rainbow can distinguish between more than 100 hues. But colorblind kids deal with a different palette. Most see only a handful of colors, and some see less than that.

Because colorblindness is a social inconvenience, parents and teachers should be especially aware of kids with the deficiency. "Colors are used as tools of communication to teach reading and math," says Steidl. Books and worksheets come in a rainbow of colors. Counting beads, chalk, maps and other activities all include color. There's no way that kids who can't see the material will be able to learn it. Children who are colorblind are easily misdiagnosed with learning disabilities, inattentiveness or laziness in school.

"If a learning disability is suspected, an eye exam by a pediatric ophthalmologist is appropriate to rule out colorblindness," says Steidl. The tests consist of displays made up of different colored dots with numbers hidden inside. A test for younger children contains simple objects hidden in the dots — objects that young kids recognize like circles, stars and squares. A child who is colorblind can't see the numbers or objects hidden inside the dots.

If you're not colorblind, try to picture a colored pie chart in a textbook. Every slice of pie is the exact same, indistinguishable color. Imagine ordering pants from a mail-order catalog in which each pair looks exactly alike. How about trying to tell if the stoplight is yellow or red when both colors appear to be the same shade of amber?

A host of activities can trip up colorblind kids. In the beginning, coloring maps might be difficult at school. Later, interpreting a litmus paper reaction, telling a friend at the beach whether or not he is sunburnt, knowing when meat is raw or well-done, or distinguishing between ripe and green tomatoes or chocolate syrup and ketchup can all offer challenges.

In addition, some foods look downright unappealing to those who can't distinguish certain colors. So, if your colorblind child turns his nose up at spinach, try to give him a break — to him it may look like a brownish cow patty.

A Little History of Colorblindness

The Allies sent colorblind soldiers to spot German camps during World War II, since they weren't fooled by camouflage. In this instance colorblindness was an advantage. However, a few occupations do require perfect color vision. Some include: pilot, firefighter, police officer and electrician.

But don't despair — there's a palette of careers that don't demand a perfect mark on the color test. And some successful folks were thought to be colorblind, including artists Renoir and Van Gogh.

Is Your Child Colorblind?

Colorblind kids have a hard time recognizing colors. They confuse pastels and other off-shades. They may call Barney blue or their toys the wrong colors. Drawing people with green faces or Santa wearing a brown suit is not uncommon. Kids can be tested for colorblindness as early as age 3. "Color testing can and should also be done at school screening examinations," says Dr. Steidl.

Why do we have 10 fingers and 10 toes?
How Glasses Correct Colorblindness
How Color Blindness Works

Is it possible for a pregnant woman to be allergic to the placenta?
Abnormal Menstrual Cycles and Fertility
Is Facebook safe for kids?