Are insect repellents safe for kids? 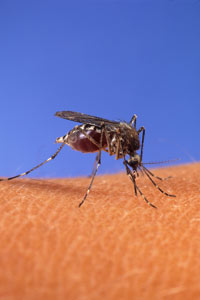 Mosquitoes like this one brought the West Nile virus to the North America for the first time in 1999. See more pictures of insects.
Courtesy USDA

The end of the summer of 1999 turned out to be a scary one for the U.S. In New York state, an outbreak of viral encephalitis inexplicably took hold; seven people died between Sept. 5 and Oct. 19 [source: CDC]. Viral encephalitis is caused by an infection of the central nervous system, where the tissue surrounding the brain and spinal cord -- the meninges -- becomes inflamed and alters their function, leading in some cases to coma and then death.

Patients suffering from acute, advanced encephalitis suffer from symptoms like difficulty breathing, seizures, memory loss and behavioral changes like the development of hydrophobia -- the fear of the sight of water [source: PDR].

As the outbreak progressed, investigators from the Centers for Disease Control and Prevention (CDC) discovered its origin. The patients suffered from an infection of the West Nile virus (WNV). An arcane virus that had plagued only Africa, Asia and the Middle East had made the jump to North America. There's no inoculation against it, and since West Nile is transmitted most commonly through mosquitoes, infection can only be prevented by thwarting the insects from biting.

While only about 1 percent of WNV cases develop into encephalitis, Americans reached for the insect repellent in droves that summer. Those folks stopped short of spraying it, however [source: Grady]. West Nile appeared at a time when the country was increasingly concerned about the safety of N,N-diethyl-m-toluamide (DEET), a common active ingredient in bug spray. DEET was created by the U.S. Department of Agriculture (USDA) in 1946 for military use and sold to consumers in the late 1950s [source: RAND]. Over the years, reports of children suffering seizures and other illnesses joined widely covered stories of a man who'd suffered a psychotic break after using too much bug spray and a woman who'd suffered a heart attack after applying bug spray before gardening [source: CDC].

Mosquitoes bearing the West Nile virus descended on a population that was increasingly interested in natural remedies, which came with an attendant suspicion of all things chemical. Chemical researchers and manufacturers were forced to admit that they don't really know how DEET works (the prevailing theory is that it masks humans from mosquitoes' perception). This put people who feared West Nile and DEET equally in quite a pickle.

Of special concern was the use of bug sprays by children and pregnant women. A rumor spread that DEET proved the most dangerous to these two groups, and federal agencies and researchers began to investigate. 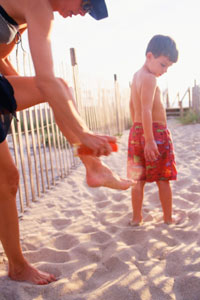 Some parents won't use DEET sprays on their children out of concern of health complications.
Thinkstock Images

The chemical DEET is a plasticizer -- it's actually capable of deteriorating plastic -- and the idea that people were spraying such a chemical on the bare skin of their children understandably caused some to shudder.

A 2002 study of 897 pregnant women in Thailand produced results that some found unsettling. While DEET has been shown in most people to be almost entirely metabolized by the liver before it's excreted in the urine, the study found traces of the chemical in the cord blood of 8 percent of the women [sources: Cecchine, Koren]. This proved that DEET could cross the placental barrier. This was enough for many pregnant women to opt against using it.

Children using DEET-based sprays also became a cause for concern when reports emerged of at least 10 kids suffering seizures after using DEET-based repellents. When applied on the skin, DEET concentrations in the blood are relatively low and can be processed by the body as it's absorbed. When it's ingested orally, however, blood concentrations are hundreds of times higher. Seizures and death have occurred in this increased concentration, generally as a result of bradycardia -- a slowed pulse.

As public concern of DEET increased, a spate of studies examined human exposure to the chemical. Children were thought to be at an especially high risk for adverse effects from DEET exposure. A study by the American Association of Poison Control Centers compared the results among adults and children in nearly 21,000 cases of DEET exposure. The study found that accidental DEET exposure produced fewer cases of adverse effects or deaths among children than it did in adults [source: Koren]. Other studies pointed out that seizures are common in the pediatric population, and that the association with DEET exposure could actually be coincidental.

For nearly 50 years, DEET was sold to consumers in concentrations of 75 percent. In the early 21st century, researchers learned that DEET's effectiveness at preventing mosquito bites tapers off after a concentration of 50 percent. A concentration of 30-percent DEET became the typical concentration for consumer insect repellents. In short order, the Centers for Disease Control (CDC), the Environmental Protection Agency (EPA), the American Academy of Pediatrics (AAP) and other groups issued opinions that DEET-based insect repellents were safe for kids over 2 months of age -- as long as label directions are followed [source: AAP].

The concern that was fostered by early reports of adverse effects from DEET exposure still looms large in the public's mind, however. 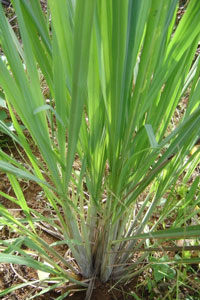 Citronella grass and lemongrass (shown) are closely related and often confused for one another. They do share the commonality of being ineffective at keeping mosquitoes away from humans, however.
©iStockphoto/earthmandala

After a federally mandated safety review of DEET was completed in 1998, the chemical was cleared and the Environmental Protection Agency (EPA), Centers for Disease Control (CDC) and other agencies issued opinions that DEET in recommended doses is safe for children. These haven't settled all parents' concerns, however. So manufacturers have created bug sprays that are marketed as kid friendly.

Perhaps because of the popular backlash against synthetic chemicals in consumer products, the overwhelming majority of these products contain mostly natural ingredients. Unfortunately, in a test of 18 commercially available insect repellents, Consumer Reports determined that most of the botanical-based products were "middling or worse" at repelling mosquitoes [source: Consumer Reports]. Naturopathic repellents like citronella oil -- extracted from a perennial grass native to Asia -- peppermint oil and catnip have been shown to be far less effective at warding off mosquitoes than DEET.

All is not lost for parents who want to protect their kids using synthetic chemical-free repellents. Two botanical ingredients have proven their worth in bug sprays.

First up is soybean oil. Not only is this ingredient safe for use in cooking and as an ingredient in foods, it works as an effective mosquito repellent as well. Clinical studies have found that bug sprays containing a 2 percent concentration of soybean oil prevented mosquitoes from biting for between 1.5 and 7.3 hours, depending on the study [source: Cox]. That's as effective as low concentrations of DEET.

Another contender for best botanical insect repellent ingredient is geraniol, a naturally occurring alcohol found in a number of essential plant oils. Though it's found in extracts that have proven unreliable in combating mosquitoes, it appears that removing it from oils like citronella make geraniol much more effective in repelling insects. There is one big drawback: Geraniol has been found to act as a skin irritant, which makes it a flawed, though effective, mosquito repellent [source: Cox].

The predominant botanical ingredient found in DEET alternatives is lemon eucalyptus oil. The ingredient is also known by its chemical name, PMD. Tests of PMD show that it's capable of preventing mosquito bites for around two hours after an application, which puts it on par with about 7 percent concentration DEET in effectiveness [source: Rutledge and Day].

Ironically, while the American Academy of Pediatrics considers DEET safe, it has yet to issue an opinion on the safety of lemon eucalyptus oil-based insect repellents for children because of dearth of studies on it [source: CDC]. The CDC warns against using it on kids under age 3 [source: WebMD].

How Empathy Benefits Children, But Could Be Bad for Parental Health
Happy Parents Make Happy Kids
Is YouTube safe for kids?