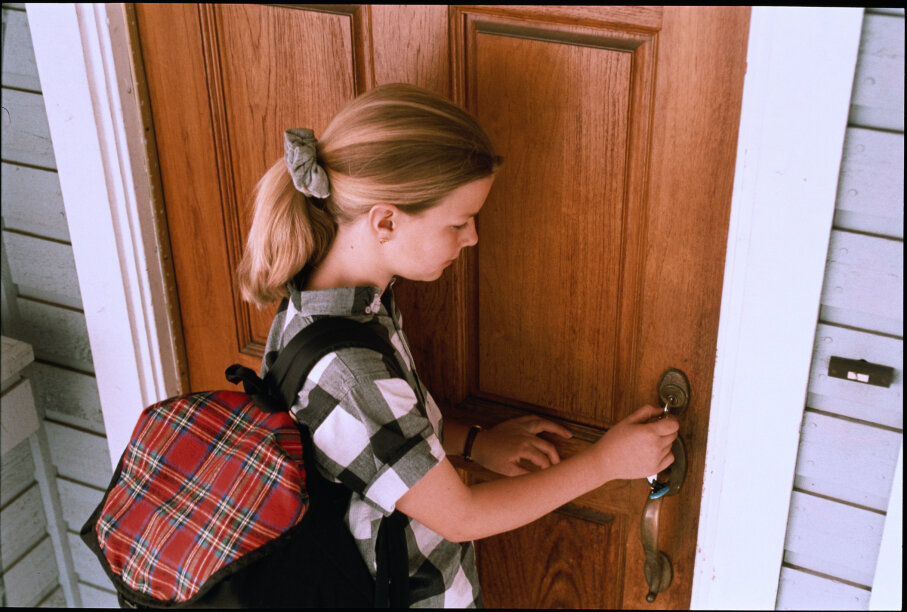 What's it like as a latchkey kid today? David Young-Wolff / Getty Images

Although the term "latchkey kid" first appeared in the 1940s to describe young children taking care of themselves after school while dad fought in the war and mom went off to work, the anxiety over latchkey kids really exploded in the United States in the late 1970s and early 1980s.

Higher divorce rates and more job opportunities for women left a reported 3 million 6- to 13-year-olds fending for themselves after school in 1982. The kids were often recognized by the house key they wore on a string around their necks. That year, People magazine ran an interview with two education researchers under the headline, "The Lonely Life of 'Latchkey' Children, Say Two Experts, Is a National Disgrace."

The experts, Tom and Lynette Long, interviewed 300 latchkey children and noted that one in three reported "high fear" when their parents were late coming home, which triggered recurring nightmares. Among the other "perils" faced by latchkey kids, the Longs said, were "break-ins, weather emergencies, injuries from falls... an 8-year-old riding a bike might get hit by an automobile."

Which made us wonder: What's the impact of the "latchkey kid crisis" 35 years later? Do latchkey kids even exist anymore? Like many other issues, it often comes down to economics.

'I loved my free childhood'

Growing up in the suburbs of Madison, Wisconsin in the mid-1970s, Julie Lythcott-Haims didn't know she was a latchkey kid. All she knew was that mom and dad both worked, so it was up to her to come home from school, let herself in, make a snack and get started on homework before running out to play with the neighborhood kids.

"I don't recall ever feeling neglected," says Lythcott-Haims. "I felt trusted, competent, it was very normal."

Lythcott-Haims sees great psychological value in the freedom she was afforded as a latchkey child of the 1970s, especially compared with what she views as the hyper-controlled and over-monitored existence of kids today. Her book, "How to Raise an Adult: Break Free of the Overparenting Trap and Prepare Your Kid for Success," is a rebuke of this overinvolved parenting style — prevalent today in upper-middle-class families — that she says produces young adults who can't think or act for themselves.

"I loved my free childhood," says Lythcott-Haims, who witnessed the ill-effects of overparenting as dean of freshman at Stanford University. "I loved the fact that my parents weren't involved in the minutia of every playdate, that they didn't feel they had to take me everywhere and stand on the sidelines of my life."

In contrast, Lythcott-Haims says, many of the students she met at Stanford were brilliant on paper — sky high grades and test scores, endless lists of activities — "But they couldn't think for themselves. They couldn't solve a simple problem without checking in with a parent. They couldn't make a choice."

Lenore Skenazy didn't grow up as a latchkey kid, but is a vocal advocate for the type of unsupervised, unstructured time that kids enjoyed 30 to 40 years ago. Her organization (or movement, some say) is called Free-Range Kids and her mission is to combat what she terms as the "hysteria" among parents that their children are constantly in danger and should never be left alone.

"When my mom let me walk to school by myself, she couldn't name ten children who had been kidnapped by strangers the way all of us can today," says Skenazy, "and therefore she wasn't burdened with the idea that what she was doing was irrational bordering on dangerous letting me have any unsupervised time."

Both Skenazy and Lythcott-Haims see overparenting as the enemy, not latchkey kids. They cite studies linking intrusive parenting with stunted psychological development, particularly in the area of "self-efficacy," the feeling that you have control over your life and that your actions lead to outcomes. Lacking that sense of control leads to anxiety and depression, conditions that are on the rise among young adults.

'Something could have easily gone disastrously wrong'

Although millions of people now in their 40s and 50s look back fondly, even nostalgically on their latchkey experience, that's not the case for everyone. As we mentioned before, there appear to be some significant differences between the latchkey experiences of poorer and wealthier American households.

Back in 1982, when the Longs conducted their study, they found that a third of kids in a poor, inner-city school they visited were latchkey kids (in one sixth-grade class, 24 out of 28 students were unsupervised after school). In contrast, when they visited a suburban school with higher family incomes, only 1 in 9 kids were latchkeys.

Deborah Belle is a psychology professor at Boston University focusing on the psychology of families. Her 1999 book, "The After-school Lives of Children: Alone and With Others While Parents Work," followed 43 families from different socioeconomic levels over four years as they navigated the shifting economic realities of employment in America, including the decision to leave kids alone at home.

"Some of the families had the kind of community, neighborhood, financial and social resources to make sure that it wasn't a problem," says Belle, "but many of these families did not."

She remembers a particularly tough situation in which two parents working low-wage jobs tried to set their work schedules so that someone would always be home with their three children, but that wasn't always possible. There were times when the oldest, an 8-year-old, was left in charge of both a 4-year-old and an 18-month-old toddler.

"And this was terrifying to the child and to the parents. In no way was this a good situation," says Belle. "Whether it had lifelong consequences for the child, I have no idea. Something could have easily gone disastrously wrong and it would have been a tragedy."

On the flip side, she met kids who did better when they had time to themselves. One 13-year-old girl complained about the noise at the after-school program meant to provide adult supervision. None of her friends were there, either. She begged her parents to let her go home instead, where she could get her homework done and even have a friend over.

"What our research demonstrated was the tremendous variety of experiences that children had," says Belle. "While some kids suffer terribly and tragedies occur because they can't be with their parents after school, we shouldn't be stigmatizing all kids or all families whose kids are unsupervised, because sometimes it's the best choice for that child."

You don't really hear the term "latchkey kid" much anymore, but that doesn't mean that they don't exist. According to the Afterschool Alliance, a nonprofit organization that advocates for after-school programs, there were 11.3 million unsupervised school-age kids in 2014. That's roughly 20 percent of the entire K-12 population in the United States.

Jen Rinehart, vice president of policy and research at the Afterschool Alliance, says that the demographics of unsupervised kids has shifted over the decade that her organization has collected data. The total number of unsupervised kids in 2014 is down from 2004, when 14.3 million kids (or 25 percent of all K-12 students) went home alone. But the numbers are mostly down among wealthier families, not the poor.

The Onion, the brilliant satirical website, ran a story in 2011 with the headline, "Study Finds Every Style of Parenting Produces Disturbed, Miserable Adults." You could make the same claim — or its opposite — about the latchkey experience. Many people loved their latchkey experience and wish their kids could have the same freedom. Others would have undoubtedly done better with more parental support.

Anecdotally, it seems that the rise in helicopter parenting isn't because people had miserable experiences as latchkey kids. It seems to be more because of the parental "fear factor" — extensive news coverage about child kidnappings, concussions and killings. It's also about making sure that kids have every opportunity to succeed — whether it's endless activities or close monitoring of schoolwork, even through high school and college.

Hara Estroff Marano wrote a book lamenting the psychological damage inflicted by overparenting. In "A Nation of Wimps," Estroff Marano argues that overinvolvement in our children's lives — the opposite of the latchkey experience — "weakens kids from within." But she's quick to acknowledge that overparenting isn't a universal problem.

"We can all recognize that the type of overparenting I'm talking about is largely a middle and upper middle-class phenomenon," says Estroff Marano. "There is a large segment of kids who are underparented."

So which is worse, leaving your kid alone with a TV and a box of Count Chocula cereal, or parenting him to death? Presumably there's a middle ground. But as well-meaning parents have discovered for decades, it's not always an easy one to find.

Now That's Interesting
Most unsupervised kids today are in high school. Interestingly, the Afterschool Alliance found that the number of unsupervised kids in elementary and middle school in 2014 was a little over 3 million, around the same as the Longs estimated back in 1982.