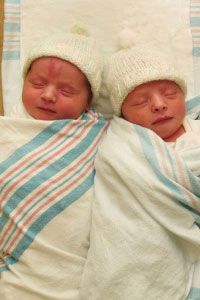 Since the 1970s, Americans have felt that two children is the perfect number to round out their family, according to a survey conducted by the Pew Research Center [source: Livingston]. For many, those two children are born as singletons, one baby at a time, often with a gap of a few years between siblings. But for an increasing number of Americans, twins are becoming more common.

Twins occur naturally in about one out of every 250 pregnancies. Your odds of having naturally-occurring triplets are about one in every 8,000 pregnancies, and quadruplets occur once in a blue moon (one in 700,000 births). You probably don't need to worry much about naturally conceiving and delivering high order multiples, though. Sextuplets, for instance, spontaneously occur in only about one in 4.7 billion pregnancies [sources: ASRM, CBC News].

But these statistics don't paint an accurate picture of multiples born in the U.S. during the last three decades. One out of every 53 babies born in 1980 was a twin, but by 2009, that number rose to one out of every 30 babies. That's a 76 percent increase in twins born in American between 1980 and 2009 [source: Rubin]. Between 2004 and 2006, likewise, more than 40 out of every 1,000 births in Connecticut, Massachusetts and New Jersey were twins. In 2009, the twin rate in Connecticut rose to 5 percent of births in that state, the highest in the U.S. And in Massachusetts, Nebraska and New Jersey, triplets accounted for more than 250 births out of 100,000, also the highest rates in the country [source: CDC].

What's behind the jump in multiple births? There are a few things going on here, and it's not something in the water. Let's discuss the factors associated with the increased odds of having multiples, including postponing parenthood, assisted reproductive technologies (ART) and even how taking oral contraception may play a role.

Delaying motherhood and the introduction of fertility treatments are the two biggest drivers behind the rise in twin births since the early 1980s.

Let's talk about advanced age first. Women may postpone having children for any number of reasons; some commonly cited are career, financial security, emotional stability and some women are waiting for the right partner. Some women may need to delay motherhood for health reasons. There's a problem with postponement, though: Your body might be keeping a different schedule that it did when it was younger. As a woman ages, the quality and quantity of her eggs declines, a decline that begins around her 30th birthday and take a big drop by her late 30s. Women who postpone pregnancy until their mid-to-late 30s or into their 40s are considered advanced-aged pregnancies. As a woman's fertility declines, she is less likely to become pregnant naturally, and her risk of suffering a miscarriage if she does conceive increases.

Fertility treatments may help, and they may be helping to increase the odds of us all seeing double. According to the American Society for Reproductive Medicine (ASRM), the risk of conceiving multiples is greater than one in three for successful pregnancies resulting from fertility treatments [source: ASRM]. This is because the treatments stack the deck, so to speak. Fertility drugs encourage a woman's body to produce multiple eggs each cycle, and multiple embryos are often implanted during in vitro fertilization.

Fertility treatments may increase the odds of having a baby when the odds seem against you, and they have become a family-building choice for many parental hopefuls. Individuals who are working against time also benefit from assisted reproductive technology. Between 2007 and 2009, the number of babies born to women under the age of 40 declined overall, but the birth rate rose as much as 6 percent for women ages 40 to 44 (which is about 3 percent of the total number of births) [source: CDC].

Babies conceived with assisted reproductive techniques and other fertility therapies such as artificial insemination and drugs used to stimulate the ovaries have been increasing since 1978, when Louise Brown was the first baby born as a result of in-vitro fertilization (IVF), a type of ART procedure. Since Brown's birth, more than 3 million babies have been born resulting from ART, and between 1980 and 2004 the number of babies born to women over the age of 40 has quadrupled [sources: Moisse, Newman].

It's not only a woman's age and prior pregnancy history that can impact her likelihood of having non-identical multiples. Her diet, height and weight and her genetic disposition can all affect her pregnancies. There is also limited evidence that women who take birth control pills may have an increased rate of conceiving fraternal twins in the two months after they stop taking the contraception [source: Good Morning America].

Let's look more closely at the risks that having multiple babies poses during pregnancy, and if there are risks for babies who share a womb.

Delaying motherhood until the 30s increases a woman's odds of conceiving fraternal twins naturally when compared to younger women -- and accounts for as many as one-third of twins born in the current boom [source: CDC]. And this is true for women who are trying to become first-time moms as well as those who are well-seasoned parents: A woman between the ages of 35 and 40 who has at least four children has a three times greater chance of having twins than a woman under the age of 20 who has no children [source: ASRM].

More babies often can mean more risks during pregnancy. Women carrying multiples have a higher chance of developing pregnancy-related complications such as preeclampsia, placental problems, gestational diabetes and hypertension than moms carrying singletons. Moms of multiples also have a higher risk of suffering moderate to severe symptoms of postpartum depression than women who give birth to single babies.

A woman carrying a single fetus and having a normal pregnancy, for example, can expect her pregnancy to last from 37 to 42 weeks, averaging a 40-week pregnancy. It's estimated that while fewer than two out of 100 singleton pregnancies end before 32 weeks gestation, as many as one out of eight twins and one of three triplets are born less than 32 weeks gestation. With each additional fetus, the length of pregnancy gets shorter, and the average birth weights are also lower. This is important because premature babies may have complications such as respiratory distress, infection and bleeding in the brain because their brain, eyes, lungs, circulatory and intestinal systems are not fully developed at the time of delivery.

On average, a singleton baby is born weighing 7 pounds (3.2 kilograms) while a quadruplet weighs just an average of 3 pounds (1.4 kilograms) at birth. Twins average 5.5 pounds (2.5 kilograms) and triplets average just 4 pounds (1.8 kilograms) each [source: ASRM]. Fewer than 40 percent of babies weighing less than 2 pounds, 3 ounces (0.98 kilograms) at birth survive, and more than 25 percent of those who thrive do so with a disability. Low birth weights put babies at risk for cerebral palsy, for example, which is four times more likely in twins than in singletons, and even greater in triplets or high-order multiples [sources: McKenzie, ASRM].

While the number of twins born in the U.S. continues to increase, triplet and other high-order multiple births are decreasing. This may be due to tighter recommendations in the U.S. (and tighter laws in countries such as England and Canada) regarding the number of embryos transferred per IVF cycle, a number which in the U.S. is based on the patient's age and the quality of the embryos. Currently, the American Society for Reproductive Medicine recommends one to two embryos transferred to women under the age of 35 and up to five in patients ages 40 and older [source: ASRM]. Patients also have a relatively new ART option called elective single-embryo transfer (eSET), an IVF procedure that transfers only a single embryo per cycle and is considered to be as successful as multiple embryo transfers in women ages 35 and younger. This option, clearly, reduces the likelihood of twinning.

If you're looking for an unassisted way of increasing your odds of conceiving twins, consider a visit to Cândido Godói, Brazil, a town where 80 families have 38 pairs of twins -- the locals haven't ruled out the water.

Women carrying multiples have a higher rate of delivering via Cesarean section (C-section) -- in fact, about 90 percent of twins are born this way [source: Reinberg].

Up Next
10 Tips for a Healthy Pregnancy
Explore More 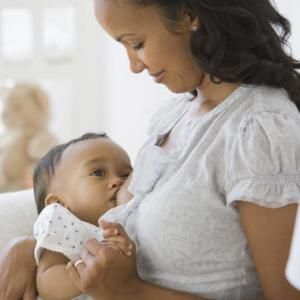 You May Like
Is the breast best for multiples?
Explore More