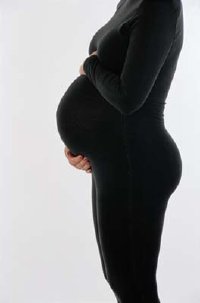 Pregnancy Image Gallery Birth defects, jaundice, and macrosomia are just some of the complications of gestational diabetes. Learn the symptoms, and more, of these conditions. See more pregnancy pictures.
Publications International, Ltd.

While the real symptom of gestational diabetes is elevated blood sugar, there are some serious complications that can stem from the condition. Women with poorly controlled diabetes, and their infants, have an increased risk for the following conditions during pregnancy and childbirth:

Birth defects. Women who have high glucose levels during the first six to eight weeks of pregnancy are most likely to bear children with birth defects. During that time, a baby's major organs are forming. High glucose levels can interfere with healthy development and damage the fetus's heart and spinal cord, as well as bones, kidneys, and gastrointestinal system. One study found that women who failed to attain good glucose control before getting pregnant were ten times more likely to bear a child with a birth defect.

Jaundice. For some reason, babies born to women with diabetes sometimes have this yellow discoloration of the skin and eyes. Jaundice occurs when the blood contains too much bilirubin, a by-product made when red blood cells break down. Although jaundice is usually harmless and fades after a few days, a physician must monitor the condition.

Macrosomia. This condition is also known as gigantism and large-for-gestational-age infant, but you can just think of it as Really Big Baby Syndrome. Plainly stated, women with poorly controlled glucose during pregnancy often give birth to immense infants. How big? By one definition, a baby is considered abnormally large if it weighs more than 9 or 10 pounds or tips the scales at a weight higher than 90 percent of other newborns.

Apart from the fact that a large newborn can't squeeze into the darling little outfit you knitted for him (and boys are more likely to be plus size than girls), what's the big deal? Plenty.

Continue to the next section for more complications related to gestational diabetes.

There are several additional risks for diabetic women whose condition is not well managed. Here are the details.

Preeclampsia. About eight percent of all expectant mothers develop high blood pressure, edema (fluid retention), and elevated levels of protein in the urine sometime after the 20th week of pregnancy. Having diabetes is one of several factors that seems to increase the risk for preeclampsia, though its exact cause is not known. Symptoms include

A doctor confirms a diagnosis of preeclampsia with blood, urine, and liver tests. The only known cure for the condition is for the expectant mother to deliver the baby. In serious cases, labor may be induced. Hospitalization is usually necessary.

Polyhydramnios. A fancy way of saying excess amniotic fluid around the baby, which can lead to several complications, including preterm delivery.

Postnatal hypoglycemia. A fetus receives oxygen from the mother's blood, which passes through the placenta, an organ attached to the lining of the uterus. Nutrients, including glucose, pass through the placenta, too. If a mother's blood sugar is high, the fetus' will be, too. That explains why babies born to women with high glucose get so fat. But it also means that the developing infant's pancreas will produce lots of insulin to process all that sugar. If the baby's pancreas fails to slow down insulin production after birth, hypoglycemia is a risk.

Dana Armstrong, R.D., C.D.E., received her degree in nutrition and dietetics from the University of California, Davis, and completed her dietetic internship at the University of Nebraska Medical Center in Omaha. She has developed educational programs that have benefited more than 5,000 patients with diabetes. She specializes in and speaks nationally on approaches to disease treatment, specifically diabetes.

Allen Bennett King, M.D., F.A.C.P., F.A.C.E., C.D.E. is the author of more than 50 papers in medical science and speaks nationally on new advances in diabetes. He is an associate clinical professor at the University of California Natividad Medical Center and cofounder and medical director of the Diabetes Care Center in Salinas, California.

Should You Save Your Baby's Umbilical Cord Blood?
I Had a Baby During the Pandemic and This Is What Happened
Egg Donation Overview