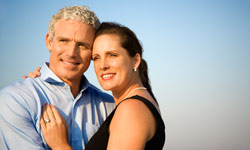 Preparing your body for a baby is like getting a nursery ready. Remove any possible dangers and make it as inviting as possible to a new little human.
Hemera/Thinkstock

Whether you planned all along to have a baby after 40 or it just happened to shake out that way, it's no secret you could be facing an uphill battle. No doubt you've heard all sorts of statistics about fertility after 35, and the facts can't be denied -- it's tougher to get pregnant when you're older, and complications are more common.

But there are advantages to getting pregnant after 40, too. It's likely that a woman has made her way up the career ladder and is in a good position financially, for example, and that kind of security is important to bringing up a child.

We can't deny the realities of a becoming a mom later in life, but being well-informed is your first step on the road the motherhood. Maybe your path will be a little rockier than someone else's. Maybe you'll get very lucky. Either way, we have some tips to get you on your way.