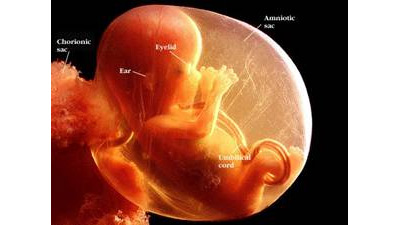 For many women, the second trimester is a definite improvement. As the nausea recedes and exhaustion abates, many women feel better and have more energy -- and appetite -- during this period. However, some women develop other unpleasant symptoms, such as heartburn.

Other changes occur in the mother's body. Even though her fetus is just a few inches long, her belly is growing. Mammary ducts inside her breasts prepare to produce milk. During this trimester, the mother's breasts will start to produce a yellowish, nutrient-rich substance called colostrum, which will feed her baby during its first few days of life.

Inside her womb, the rapid activity continues. Although the mother may not be able to feel it yet, the fetus now kicks and moves. Its head -- which just a few weeks ago dwarfed the rest of its body -- is now more proportional. A fine hair called lanugo covers its body. The kidneys and urinary tract start to produce urine and release it into the amniotic fluid. The liver begins secreting bile, and the spleen begins to aid in the production of red blood cells.

By week 15, the fetus is around five inches long and weighs about two ounces. Although its eyelids are fused shut, its eyes are now sensitive to light.

The mother will make her second prenatal doctor visit between weeks 12 and 16 of her pregnancy. At this visit, her Ob/Gyn may perform an ultrasound to look at the baby. Sometimes the doctor can determine the sex during this visit. The doctor will probably also measure the fundus -- the distance between the top of the mother's pubic bone and the top of her uterus. This measurement will allow the doctor to track the fetus' growth throughout the pregnancy.

Tests done during this trimester include an Alpha-Fetaprotein (AFP) or triple test -- a blood test that detects levels of alpha-fetoprotein (a protein produced in the fetus's liver) to identify Down syndrome or spina bifida. If the mother is over age 35, she might also have an amniocentesis, a procedure in which the doctor inserts a thin needle into her abdomen and removes a small sample of amniotic fluid to test for birth defects and chromosomal abnormalities. Between weeks 16 and 20, the fetus begins to hear and may even be able to hear the sound of its mother's voice. It can frown, squint, and make other facial expressions. The fetus' scalp is sprouting tiny hair buds, its skeleton is hardening, and millions of tiny neurons in its brain help its muscles move. Its tiny heart pumps about 25 quarts of blood each day. Its reproductive organs are forming. If the fetus is a girl, her ovaries are beginning to produce the millions of eggs that she will possess for her entire lifetime. During this period, the mother may start to experience "quickening" -- feeling her tiny fetus kick.

The mother's body continues to undergo numerous changes. Often, pregnant women appear to "glow." Although many women are truly suffused with the joy of pregnancy, the glow is often due to increased blood flow to the face. Many women also have a dark line running from their belly button to their pubic bone. This line, called linea nigra, occurs because of an increase in skin pigmentation, or melanin. It should disappear shortly after the baby is born. Some women also develop stretch marks -- thin pink or brown lines on their belly which often fade soon after the baby is born. Another common problem is edema, swelling of the ankles and feet due to fluid retention. Severe swelling in the hands and face could be a sign of a potentially dangerous condition called pre-eclampsia, which prevents the placenta from getting enough blood.