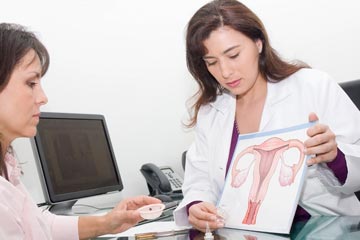 Concerned about HPV and whether it'll affect your ability to conceive? Talk with your gynecologist.
©iStockphoto.com/Thinkstock

When it comes to sexually transmitted diseases, none is more prevalent in our society than the human papillomavirus or HPV. Men get it, women get it and -- in nine cases out of every 10 -- the body rids itself of the infection within a couple years [source: Weil]. Even so, the severity of HPV cases can vary greatly. Some people may not even know they've had it, while others can develop cancer as a result of this common STD [source: FertilityFactor.com]. It doesn't typically influence the fertility of a woman, although treatments for HPV have the potential to make getting pregnant more difficult.

The human papillomavirus can cause precancerous cells in the cervix. If these cells are discovered, a physician will likely remove the affected tissue. The procedure uses extreme heat or cold and can reduce a woman's production of cervical mucus, which plays a role in helping sperm reach the female egg for fertilization. There's also a chance that the cervix can become somewhat fragile following treatment, increasing the likelihood of a premature birth, should the woman become pregnant [source: FertilityFactor.com]. Fertility specialists strongly advise against ignoring the virus for fear that treatment could, in rare cases, compromise fertility or full-term births.

The human papillomavirus doesn't cause miscarriages, and it's highly unlikely that a woman with HPV who becomes pregnant will pass the infection on to her child. However, cases of babies with warts in their throats -- known as respiratory papillomatosis -- caused by the mother's infection have been diagnosed. The chances of an infant developing this serious condition are very remote [source: Weil].

There are dozens of strains of HPV, some of which create genital warts. Regularly scheduled Pap smears can ensure that precancerous cells are discovered and treated quickly [source: FertilityFactor.com].

Many of the most dangerous forms of the human papillomavirus can be prevented with a controversial vaccine known as Gardasil. The drug, produced by Merck, is typically given to preadolescent girls to guard against cervical cancer in later life. Some doctors have raised objections to the use of Gardasil, noting that more than two dozen deaths have been linked to the vaccine [source: Chitale]. A Centers for Disease Control and Prevention/Food and Drug Administration study notes that 23 million doses of the drug have been administered and the reported deaths were not clearly attributable to Gardasil [source: Centers for Disease Control and Prevention]. Still others argue that more research needs to be done and parents should consult with their doctors before allowing their daughters to be vaccinated [source: Chitale].

HPV is common and typically not life threatening. It does, however, have the potential to cause cancer. While it won't likely interfere with a woman's ability to conceive, it -- like any health condition -- should be closely monitored and discussed with a qualified physician.

Can acupuncture and hypnosis treat infertility?
Is conceiving after a miscarriage difficult?
Can you test your fertility at home?