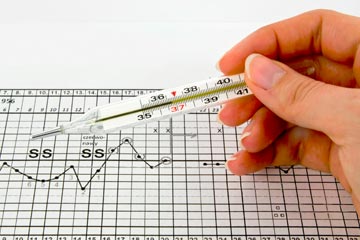 Trying to chart your fertility based on your menstrual cycle? Several factors can cause an irregular schedule.
iStockphoto/Thinkstock

A pubescent girl spends about half her waking moments wondering if she's normal. Are her breasts ever going to grow (or ever stop growing)? Do other girls get hair on their stomachs/nipples/upper lips? And all those sexual desires -- do they make her a total weirdo?

For a lot of women, the frequent peer comparisons don't end in adolescence. But while many are perfectly at ease talking about bikini-line hair removal, periods are often shrouded in a little more secrecy. A woman may not hesitate to ask a stranger in the bathroom for a tampon, but she may feel uncomfortable asking a friend about how heavy her flow is. She may even find it difficult to talk to her gynecologist.

And when it's not being discussed, it's hard to know what exactly "normal" is.

The normal range for a woman's menstrual cycle is from 21 to 35 days, and the average period lasts from four to seven days [source: Cleveland Clinic]. An abnormal cycle is one that's shorter or longer than that range, or one that's infrequent or absent altogether. If a woman's period is extremely light or extremely heavy, or very painful, those are also indicators that something may be amiss.

The question of whether or not her menstrual cycles are normal becomes most important if and when she wants to conceive. The more regular they are, the better the opportunity to chart her ovulation accurately -- and determine the best time to have sex to get pregnant. And if her cycles are abnormal, there's a chance that a medical condition is to blame, one that will need to be treated before she can conceive.

So what can cause a woman's cycle to go awry?

If you're sexually active and miss a period, the first thought that comes to mind probably involves a trip the drugstore for a pregnancy test, ASAP. But there are other factors that can mess with your menstrual cycle.

Stress, for example, can be the culprit behind a late period, as can travel (which can sometimes be synonymous with stress) [source: WebMD]. A change in weight can affect a woman's period, and so can illness and certain medications. Apparently, our periods are creatures of habit.

Some possible causes of an abnormal cycle, however, are medical conditions that need to be addressed.

Now that we know what can go wrong with a woman's menstrual cycle, let's find out how these conditions can affect fertility.

The Rarest of Them All

According to the Department of Health and Human Services Office of Women's Health, while endometriosis is usually found on reproductive organs, it's been known to affect the brain, lungs and skin [source: WomensHealth.gov].

What's going on during a woman's menstrual cycle is much more complex than you might think. The cast of characters during that 21-to-35 day program includes the hypothalamus, the pituitary gland, and the hormones estrogen, follicle stimulating hormone (FSH), luteinizing hormone (LH) and progesterone.

Eggs don't just drop from a woman's ovaries like apples from a tree -- the brain kicks off a carefully orchestrated process that results in a small window for an egg to be fertilized by sperm.

At the beginning of the process, one hormone triggers eggs to mature, followed by another that tells the egg to begin its road trip down the fallopian tube. Yet another hormone prepares the uterus to be as hospitable to a fertilized egg as possible. If there is no union of egg and sperm, hormone levels change and the uterus gets rid of that cushiony lining, which is what a period is.

With so many steps, there are opportunities for mishaps -- which means the possibility of infertility.

The misplaced cells that characterize endometriosis, for example, respond to the hormones telling them to swell, but they can't be shed through the vagina. The tissue and blood have nowhere to go except inside the body, where they can cause scarring and blockage of the fallopian tubes [source: WomensHealth.gov]. PCOS messes with a woman's hormones, which throws the whole process off balance. Certain types of fibroids can change the shape of the uterus, and PID damages the fallopian tubes, resulting in an egg's inability to travel and possibly a life-threatening ectopic pregnancy, when a fertilized egg grows in the wrong place [sources: Parker; CDC].

The good news is that the more we know about conditions that affect a woman's fertility, the greater the chances of finding a treatment that works. Today, there are more options for infertility treatment than ever before. Depending on the cause of a woman's abnormal cycle, the solution may be as simple as weight control. But you won't know until you talk to a doctor, so make the appointment today.