Can acupuncture and hypnosis treat infertility?

Acupuncture and In Vitro Fertilization 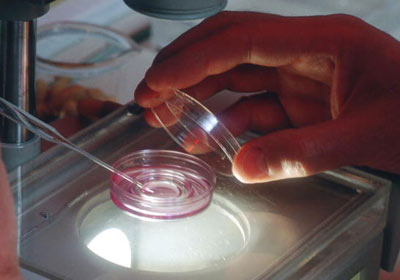 A doctor fertilizes a woman's eggs for in vitro fertilization.
Yvonne Hemsey/Getty Images

If structural issues are the cause of infertility, acupuncture alone is generally not effective. (Structural problems include scar tissue in a woman's uterus or abdomen as a result of previous surgeries, and obstructed sperm ducts in men.) However, there is evidence that acupuncture works well in conjunction with medical treatments like in vitro fertilization (IVF).

Patients who suffer from damaged fallopian tubes or restricted sperm ducts often turn to IVF. Some studies have shown that the use of acupuncture along with IVF can increase pregnancy rates and decrease miscarriage rates. A 2006 study showed that women who received acupuncture immediately before and after embryo transfer had a pregnancy rate of 39 percent. Ninety-seven percent of these women carried their babies to term. Of the women who didn't receive acupuncture, 26 percent got pregnant and 96 percent of them carried to term [source: Dieterle et al].

Another study found that three acupuncture sessions both before and after embryo transfer improved fertilization rates. One study of 258 women found a 10 percent increase in pregnancy rate when they used acupuncture in conjunction with IVF [source: New Trends in Infertility]. Even more impressive results were obtained in a study in which pregnancy rates hit more than 42 percent with acupuncture treatments during fertility treatments. This is nearly twice as much as the group of women who did not receive acupuncture, in which only 26 percent got pregnant [source: Simon].

Researchers have conducted several studies in an attempt to scientifically explain the benefits of acupuncture. One concluded that acupuncture may improve IVF success rates in four possible ways.

However, a study presented in August 2007 to the European Society for Human Reproduction and Embryology (ESHRE) found that the use of complementary medicine with IVF actually decreased a woman's chance for pregnancy. The study included several different types of alternative therapy, so it isn't clear if one specific therapy could have a negative impact on fertility or if a combination is to blame. In this study, 50 percent of the women used herbal medicine, 19 percent used acupuncture and 40 percent used a combination of alternative therapies. The study concluded that the pregnancy rate for women using complementary therapy was 45 percent. Sixty-six percent of women using IVF without complementary medicine got pregnant [source: ESHRE]­­.

In the next section, we'll discuss how hypnosis may help boost fertility.­