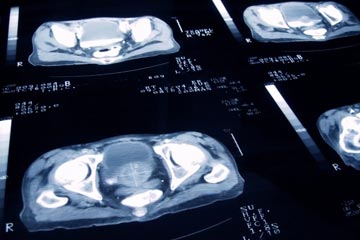 The first concern of any male diagnosed with prostate cancer is personal survival; the second might very well be the survival of the species. For men who want to have children, prostate cancer is the proverbial double whammy. The disease itself, the most common form of cancer in men, can be devastating [source: RadiologyInfo]. But even if treatment for the cancer proves successful in eradicating the disease, there is the additional threat of how those treatments can affect a man's fertility.

One such form of treatment is brachytherapy. Derived from the Greek word brachy, meaning "close" or "short distance," this minimally invasive treatment -- sometimes known as interstitial radiation therapy or seed therapy -- employsdoses of radiation to destroy cancer cells. It is generally considered a good option for men with early-stage prostate cancer [source: National Cancer Institute].

There are two types of brachytherapy, low-dose (LDR) and high-dose (HDR). In low-dose brachytherapy, surgeons will place radioactively charged seed implants throughout the prostate. These seeds will remain in the prostate, even after the cancer-fighting radiation has worn off (anywhere from two to 10 months). This is typically done as an outpatient treatment.

High-dose brachytherapy is a bit more involved and will require a hospital visit. With HDR, surgeons insert high-dose radiation via a series of flexible catheters into the prostate. After a few minutes, the radiation source is then removed. The catheters are removed after the full course of treatment.

Both treatment methods can have several side effects that patients should be aware of, especially those regarding sexual activity and fertility.

The prostate, part of the male reproductive system, is a small, walnut-sized gland that sits under the bladder, and in front of the rectum. It produces semen, the opaque fluid responsible to carrying sperm from the testicles through the penis during ejaculation. The prostate -- in addition to the seminal vesicles that sit just above the gland -- also helps produce zinc, citrate and fructose that give sperm the required energy to make their journey. So, any treatment that impairs the function of the prostate can have an adverse effect on fertility.

In early stage prostate cancer, the cancer cells are confined to the prostate (it is one of the slowest growing cancers, and can take 10 to 30 years for a tumor to grow large enough for detection) [source: National Cancer Institute]. However, given the prostate's role in sperm delivery, concerns of radiation treatment are well founded.

Any male patient considering brachytherapy can always opt for sperm banking to ensure an ample supply following treatment. However, a study conducted by the Temple University School of Medicine in Philadelphia "found no significant change in semen parameters post-therapy" for four young patients, and three were able "to father a child subsequently without any deleterious side-effects" [source: Mydio and Lebed].

Still, the same study recommended that brachytherapy patients "should wait for at least three to four months before trying to conceive," due to the half-life of the radioactive materials used in the treatments. Others suggest a much longer window -- up to 18 months -- which makes the sperm bank option more appealing [source: Prostate Cancer Treatment Guide].

In short, the greater concern is not the quality of the sperm, but the mode of transportation. Simply, the prostate gland will not produce the same amount of semen, or the same quality, immediately after treatment, and that will have an impact on sperm mobility.

According to the Prostate Cancer Foundation, roughly 10 percent men with prostate cancer will also have seminal vesicle invasion. In these patients, the cancer has either spread into the seminal vesicles or has spread around them. In this instance, provided the patient doesn't have a complete prostatectomy, the seminal vesicles will also be targeted during radiation therapy. This will also impair the ability of sperm to travel.

There is also the possibility that brachytherapy can adversely affect sperm counts. Low levels of scatter radiation can reach the testicles, decreasing sperm production. Though this reduction is usually temporary, permanent reduction in the sperm count or sterility has been reported [source: UCSF Medical Center].

Since prostate cancer typically develops very slowly, symptoms can be difficult to identify. Trouble passing urine can be a red flag. For some men, the first noticeable signs come only after the cancer has spread, resulting in pain in the back, hips or pelvis areas. Check with your doctor if you're unsure.

Pros and Cons of Brachytherapy

There is no fail-safe, or fool proof, form of cancer treatment. All have benefits as well as risks. The same holds true for brachytherapy. Perhaps the single biggest advantage of brachytherapy is its effectiveness in treating cancer. Several long-term studies have put the recurrence-free survival rate somewhere between 77 and 93 percent [source: Prostate Cancer Treatment Guide].

Initially, brachytherapy offers quick treatment and fairly quick recovery compared to other prostate cancer options. This is especially true for low-dose treatments. Since the radiation seeds are confined to the prostate, this is little impact on the bladder, urethra or rectum. Men with bowel problems such as irritable bowel syndrome (IBS) often tolerate brachytherapy treatments well.

On the flip side, the very radiation that is being used to kill off cancer cells will diminish the prostate's normal productivity. The prostate will not produce the same amount or quality of semen until it has the chance to recover. Most men report a decrease in their amount of ejaculation [source: Prostate Cancer Treatment Guide]. The treatment can also lead to bruising of the patient's sexual organs, as well as the inner thighs and rectum [source: The Prostate Cancer Charity].

Also, brachytherapy, similar to surgical options, can lead to erectile dysfunction issues, but on a different timeframe. Because radiation takes longer to affect surrounding nerve tissue, including the adjacent erectile nerves, these problems are expected to develop anywhere from three to five years after treatment [source: Prostate Cancer Foundation]. There is also some concern that the radiation treatments can affect the vessels that supply the blood necessary for an adequate erection [source: Prostate Cancer Treatment Guide]. A patient's age and health can also result in problems with erectile dysfunction.

Some patients have complained of painful ejaculations initially after treatment, which can dull desire. However, most also report that those symptoms fade with time. A patient's ejaculate can also appear discolored -- red or brown -- following treatment. This is normal.

Though rare, seed migration can also be an issue. While these rogue seeds often pass through the urinary tract, they can also be passed during ejaculation [source: Prostate Cancer Treatment Guide]. As a result, doctors will encourage their patients to use condoms during sex the first few times post-treatment.

During brachytherapy treatment, patients may find they have a more frequent and urgent need to pass urine, more discomfort when passing urine, and bowel problems, such as diarrhea, trouble controlling bowel movements, and rectal bleeding. After treatment, they can develop problems with emptying their bladders, or experience an inconsistent or weak urine stream. These issues can sometimes be managed through physical therapy or medication.

Brachytherapy can be used in conjunction with external beam radiation therapy. This treatment involves a machine that sends a precise bean of radiation from different points outside your body to attack the cancer cells. According to the Prostate Cancer Foundation, the use of low-dose brachytherapy after external beam radiation therapy has five-year disease-free rates of roughly 50 percent [source: Prostate Cancer Foundation].

What happens when pregnant women smoke?
Signs and Symptoms of Labor
How to Adjust to a Newborn