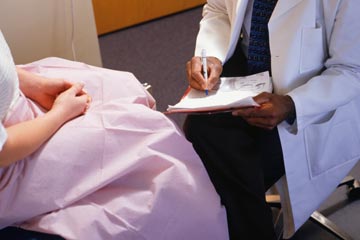 For women diagnosed with an ovarian cyst, remember that most types do not directly affect your chance at having a child.
Keith Brofsky/Photodisc/Thinkstock

For a woman getting a routine checkup from her gynecologist, the news that she has an ovarian cyst could be quite troubling. However, she shouldn't necessarily be worried.

An ovarian cyst is a fluid-filled sac that forms on or inside a woman's ovary, the two organs responsible for producing eggs and certain hormones in women [source: PubMed Health].

Most ovarian cysts aren't dangerous to a woman's health, which is good considering they most often occur between puberty and menopause -- during a woman's child-bearing years. Most cysts are benign, meaning they are not cancerous [source: HHS].

For women planning on having children, the issue of a cyst can raise plenty of questions. In this article, we'll look at how ovarian cysts affect a woman's body, in particular her fertility.

Infertility is not just a fluke; it's a serious medical condition that affects both women and men. In fact, it impacts about 7.3 million women in the U.S., roughly 12 percent of those living through their child-bearing years [source: ASRM].

Ovarian cysts can interfere with a woman's ability to ovulate, the process where ovaries release a mature egg through the fallopian tubes and into the uterus [source: American Pregnancy Association]. Irregularities with ovulation account for a quarter of infertility cases in women [source: ASRM].

But not all cysts act in this way, and we'll also look at the different types of ovarian cysts and whether they affect fertility.

There is hope for women facing infertility. A majority of cases, 85 to 90 percent, are resolved through procedures involving surgery or medicine [source: ASRM].

It should go without saying, evidence that an ovarian cyst is causing infertility can only be diagnosed by a medical professional. Always seek a doctor's opinion if you have any concerns.

Now let's look at the types of ovarian cysts that do and do not affect a woman's ability to conceive.

There are different kinds of ovarian cysts, but only certain types affect a woman's fertility.

As we have discussed, most ovarian cysts are not considered dangerous. These typically fall under the category of functional ovarian cysts, those that form during a woman's normal menstrual cycle [source: PubMed Health].

Functional cysts form in two different ways: as a follicle cyst or as a corpus luteum cyst [source: HHS].

During a woman's monthly cycle, a tiny follicle forms on one of her two ovaries. This follicle is where a woman's egg develops into a fully mature one ready for conception.

If the sac of the follicle doesn't open to release the egg, it can continue growing and fill with fluid. This is known as a follicle cyst, a harmless formation that is often shed within one to three months [source: HHS].

Even if the follicle does break open to release the egg, there are instances where the sac closes back up instead of dissolving. In this case, fluid builds up in what's called a corpus luteum cyst. Though they can grow and become painful, most go away within a couple of weeks [source: HHS].

Two other types of cysts, cystadenomas and dermoid, also do not impede fertility [source: Gallenberg]. Though serious and often requiring treatment, cystadenomas are fluid- or mucus-filled growths that can become large and cause pain. Dermoids are cysts formed of various cellular matter, sometimes including hair, skin or even teeth, but are otherwise mostly harmless [source: HHS].

So what about the types of ovarian cysts that do cause infertility? There are two: endometriomas and cysts formed by polycystic ovary syndrome [source: Gallenberg].

Endometriosis is a sometimes painful condition where uterine tissue called endometrium grows outside the uterus, causing a number of complications [source: HHS]. One of them is infertility. If endometrium forms on the ovaries it can cause endometriomas that prevent a woman from producing fertile eggs [source: Gallenberg].

Another condition, polycystic ovary syndrome, occurs when a woman's reproductive hormonal balance is off. In women who have this, the ovaries don't produce the needed hormones that cause follicles to release mature eggs. These follicles that don't break open become cysts. The condition is often marked by infrequent menstrual periods [source: HHS].

In fact, polycystic ovary syndrome, or PCOS, is the leading cause of infertility in women [source: HHS].

What is antral follicle count?

So what is a woman to do if ovarian cysts are preventing fertility? There's one more important topic to cover. As mentioned, the ovaries produce follicles that serve as little chambers in which a woman's eggs mature.

Every woman is born with all the eggs she will ever produce. During each menstrual cycle, she sheds the mature egg that isn't fertilized. By menopause, she will have shed all of her eggs [source: Sherbahn]. However, the number of eggs a woman has remaining pre-menopause is called her ovarian reserve.

But what does this have to do with ovarian cysts? For women who have a potential fertility problem linked to ovarian cysts, this could be welcome news.

Many women who have been diagnosed with infertility have found success with medical procedures, a major one being in vitro fertilization. With IVF, a woman's egg is removed from her ovaries and placed with the male partner's sperm. If the sperm successfully fertilizes the egg, it is then placed back in the woman's uterus to continue the conception process [source: ASRM].

For those who attempt IVF, it is not a guaranteed success. But a doctor can help assess a woman's chance at conceiving through IVF by performing an antral follicle count.

Antral follicles are those that the woman's body has yet to use, also called resting follicles. By counting these follicles through the use of an ultrasound, a doctor can better guess a woman's potential ovarian reserve, or her number of remaining eggs [source: Sherbahn].

So there is hope for women battling infertility. And for those diagnosed with an ovarian cyst, remember that most types do not directly affect your chance at having a child. If diagnosed, talk with your health care professional about your treatment options.

I Love to Count

Thanks to the techniques of modern medicine, the follicles produced by the ovaries can serve as a good way to determine a woman's potential fertility count as she ages.