Browse the article How can yoga increase fertility? 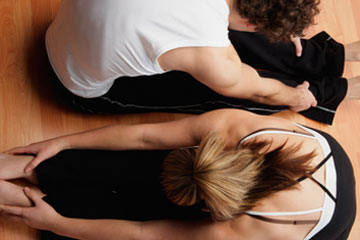 Both men and women can benefit from yoga's stress-reducing nature, so if you're trying to conceive, why not take a class together?
©Design Pics/Thinkstock

Each year, more than 6 million American women between the ages of 15 and 44 have trouble conceiving or carrying a pregnancy to term [source: Munk]. For those who turn to fertility treatments, the cost of having a baby can run from $10,000 to $20,000 per treatment -- the American Society of Reproductive Medicine estimates that one round of in vitro fertilization (IVF) typically costs $12,400 [sources: RESOLVE, Skoch]. And that's not including medicine.

There may be an alternative, complementary fertility treatment that costs only, on average, $12 per session [source: Evans]. Yoga class.

There are different types of yoga, but all are usually a mix of poses (called asanas), controlled breathing practice and meditation. Almost everyone knows that practicing yoga helps your improve balance, flexibility and strength, and according to the journal Alternative Therapies in Health and Medicine, about 15 million people in the U.S. have tried yoga at least once [source: Weil].

Recently, scientists have been studying how practicing yoga may also have a positive impact as a therapy for chronic health conditions. Currently, practicing yoga is associated with better cardiovascular health as well as a stronger immune system and nervous system. And anyone looking for a fertility boost will be interested to know it also seems to have a positive effect on the reproductive system.

Practicing yoga as therapy won't (and can't) treat infertility problems such as cysts, blocked tubes and endometriosis -- but what it is good for is treating fertility problems that might be caused by a common malady: chronic stress.

We all deal with some level of stress on a day to day basis, but when stress becomes a chronic condition in our lives it can cause havoc in the body, leading to health problems such as anxiety and mood disorders, cardiovascular disease, and a depressed our immune system. According to the results of a survey conducted by the American Psychological Association (APA), it's chronic stress that keeps almost half of us awake at night [source: APA].

The role of stress in the fertility equation has always been thought of this way: Infertility causes stress, but stress doesn't cause infertility. As it turns out, that statement may not be entirely accurate. Stress may play a role in why we struggle with infertility, and yoga can help you manage stress.

Chronic Stress and Its Effect on Fertility

Chronic psychological stress in our daily lives may change how our bodies regulate hormones, which can cause problems with ovulation, egg fertilization, implantation and other reproductive impairments. And it may have an impact on male fertility as well -- it's estimated that as many as 10 percent of infertile couples may be impacted by male sexual dysfunction (impotence) related to chronic stress [source: Seibel].

According to a recent study published in the journal Fertility and Sterility, women with high levels of cortisol (the body's stress hormone) and alpha-amylase (an enzyme circulating in our body when we're under stress) in their saliva have more difficulty conceiving than women with lower levels of the stress indicators. In fact, their fertility rate is as much as 12 percent lower each cycle [source: Louis]. Levels of epinephrine (a stress hormone you know as adrenaline) have also been found to be higher in women with unexplained fertility problems, and those elevated levels of epinephrine may constrict blood flow to the uterus [source: Bouchez].

Although there is still research to be done on what exactly it is about yoga that affects fertility, the theory is that when you reduce the body's stress response, you up your odds of getting pregnant. Consider this: A recent study found fertility patients who practice yoga specifically tailored to reduce stress may increase their fertility by as much as 35 percent [source: CBS News]. And according to data from 2000, as many as 55 percent of participants in a yoga-oriented, mind-body-based fertility program at the Benson-Henry Institute for Mind Body Medicine at Massachusetts General Hospital conceived during their first year in the program [source: Wills].

And for anyone trying to get pregnant, whether having trouble doing so or not, yoga will help melt away the emotional stress that can come along with the path to parenthood. Researchers have found that after attending just one yoga class both women and men reported they felt their mood improved. And one recent study found that people who frequently practice yoga have higher levels of a hormone called gamma-aminobutyric acid (GABA) than those who don't practice regularly (or at all) -- GABA is important in regulating mood, and when it dips too low we're at an increased risk of suffering from anxiety and depression (which in turn can increase our stress about conceiving).

For the biggest boost from your yoga practice look for classes that emphasize a gentle, restorative practice, such as Hatha or Anusara yoga styles, for example, to maximize yoga's stress-reducing benefits.

The most common cause of infertility in women is a condition known as polycystic ovarian syndrome (PCOS). Research has found an association between PCOS and insulin resistance. Can yoga help? Maybe so. Preliminary studies find that practicing yoga for as little as eight days may help normalize fasting glucose levels [source: Weil].