Guide to Being 16 Weeks Pregnant

Browse the article Guide to Being 16 Weeks Pregnant 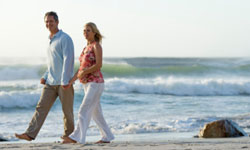 By the time the 16th week of pregnancy rolls around, your abdominal area will be in the process of transitioning from that "I ate a little too much at lunch" look to a full-fledged baby bump. You can certainly expect some major changes in the weeks and months to come, but for the most part, this portion of pregnancy is a continuation of the delightful second trimester.

Sure, you might be feeling a little bit like a puppy up for adoption with all of the random belly pats you're getting right now. Otherwise, the absence of the nausea that you might've experienced during the first trimester is reason enough to enjoy this period to the fullest! Keep reading to find out what you can expect during the 16th week of pregnancy from both your body and the bun in your ever-growing, but still beautiful, oven.

At this point in your second trimester, you're probably feeling about as fabulous as you ever have. Your morning sickness has hopefully long since passed, and your belly is showing just enough to be adorable, but not so much that you're uncomfortable or can't see your shoes. Chances are that you're donning maternity wear full-time now, which is totally normal and probably much more comfortable than your normal duds. If, by chance, you're one of those women who can still fit into your own clothes, you really shouldn't advertise the fact to your other pregnant friends.

It goes against the grain to be excited about weight gain, but in this case, modest gain is necessary to cultivating a happy, healthy pregnancy. Talk to your doctor if you fear that your weight isn't in the normal range; he or she can develop a nutrition plan to keep you on track. 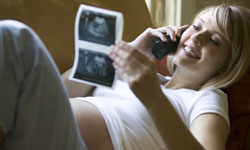 That sonogram can reveal whether you should paint the nursery blue or pink.
Photodisc/Thinkstock

Although the little stinker is still quite some time away from looking like the baby you long to snuggle, he's undeniably on the path! Still just a peanut at a weight of only 2.8 ounces and crown to rump length of about 4.5 inches or so, your little guy or gal is now sporting fingernails, eyelashes and hair, among other equally adorable assets. He's also able to move his itty-bitty appendages, and his muscles are capable of responding to commands from his brain.

At long last, the sex organs are now developed and can be visualized using an ultrasound. A few of you lucky ducks will be able to learn this week whether your future will hold monster trucks or baby dolls, but many of you will have to wait just a bit longer. Most physicians and midwives require the pregnancy to be at least in the 18th week of gestation before the "big" ultrasound takes place.

Before you get all riled up, bear in mind that they're not intentionally trying to annoy you. Instead, they want to wait until the fetus is more developed so that they can more easily identify any defects or other issues of concern. Think of this as an exercise in patience, which you'll surely need in excess once the toddler years roll around.

Although you're probably feeling a whole lot better than you did just a few short weeks ago, you're still in the midst of creating life, which is very energy-consuming business. To that end, your partner should remember that you tire out more easily and need more help around the house than you would normally, particularly if you have other children already. Don't expect him to be a mind-reader, though (he's still a man, after all). If you want him to pitch in with the cleaning, dinner prep or simply entertain the older kiddos, let him know!

Now's also a prime time to drop not-so-subtle hints about your desire for a well-earned babymoon before the discomfort of the third trimester kicks in. You don't have to do anything fancy to achieve the relaxing, one-on-one time that the two of you probably need. A babymoon can be as simple as turning off your phones and watching movies in your pajamas all weekend, or you can choose to splurge on a luxurious, pre-baby vacation. Of course, be sure to clear all travel plans with your physician beforehand, particularly if you have any history of pre-term labor or existing complications.

If you've been putting off the decision of whether to find out your baby's gender via ultrasound or save the big reveal for delivery, it's time to make up your mind. The appointment in question will take place in the next few weeks!

There are obvious pros and cons on both sides of this debate. If you find out the baby's gender ahead of time, you can choose a name, decorate the nursery and purchase the appropriate clothes. On the flip side, many traditionalists insist that spoiling the surprise detracts from the excitement of the child's birth. (As someone who found out the genders of my kids the very minute the doctor allowed me to, I disagree with this argument. I still thought my kids' birth days were pretty spectacular, despite the fact that I knew they were coming out with boy parts.) Saving the surprise for delivery day carries a big emotional impact, but you'll be just as excited if you find out earlier. So, make whatever decision you feel most comfortable with. It's truly a win-win situation, either way.

Shockingly enough, it's still possible for a technician to incorrectly determine the sex of your baby. So, before you paint your nursery, you might want to get a second opinion in the form of a 3-D ultrasound or have the radiologist show you exactly where that penis or labia is located. It might seem overly clinical, but you'll thank me later when you're not spending an entire day returning pink bedding.

If your ultrasound happens to fall right before a big event, like Christmas, Father's Day or Grannie's birthday, you might consider having the technician write the baby's gender on a piece of paper, seal it in an envelope and then wait to open it on the day in question. Best gift ever!

By the 16th week, you might be feeling the occasional bout of fetal movement. Known as quickening, at this stage, movement is less like a kick and more of a bizarre sensation that some women liken to popcorn popping or gas bubbles. Don't fret if you haven't been privy to this one-of-a-kind experience yet. Some women feel fetal movement early on in pregnancy, whereas others can go many more weeks before feeling even the slightest hint of baby aerobics. My first child waited until well past the 20-week mark to make his presence known, whereas my second started turning tiny somersaults right around the 15th week.

Still worried? Just wait for your upcoming ultrasound, where you'll be able to visually confirm baby activity, including thumb-sucking, yawning and arm or leg movement.

There's no need to cancel a trip just because you're pregnant. In fact, the second trimester is prime travel time! To be on the safe side, find out where the best medical facilities are located in your destination, just in case you need them.