by Christine Venzon
Prev NEXT
5 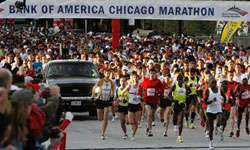 We applaud anyone who decides that this is where they want to be -- well, ever, but especially during their ninth month of pregnancy.
AP Photo/Nam Y. Huh

Someday, if June Miller walks around Chicago for the first time and feels like she's been there before, she'll be right -- in a way. June was born just hours after her mother, Amber Miller, jogged and waddled those streets at 38 weeks and five days pregnant (40 weeks being full term) while taking part in the Chicago Marathon on Oct. 9, 2011.

It's generally safe for experienced distance runners to continue competing under medical supervision while pregnant. In fact, some researchers think that pregnancy serves as mental and physical conditioning. Doctors warn against taking up the sport during pregnancy, but do recommend less demanding forms of exercise.

Miller follows in the footsteps of other runners who have mixed marathons with maternity. For example, world-record holder Paula Radcliffe was back in training one week after giving birth to her daughter, Isla. Ten months later, she won the 2007 New York City Marathon.

And actually, the Chicago Marathon wasn't the first time Miller ran with a baby on board. She had competed in the Wisconsin Marathon five months before, also while carrying June [sources: AP; Longman]. If prenatal experience counts for anything, June will have a head start if she inherits her mom's love for running.

After reading our next story, you may ask, "What was he thinking?" We'll supply the details. You can answer the question for yourself. 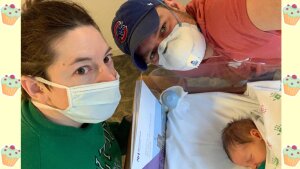