Browse the article Why Would Anyone Eat Their Placenta? 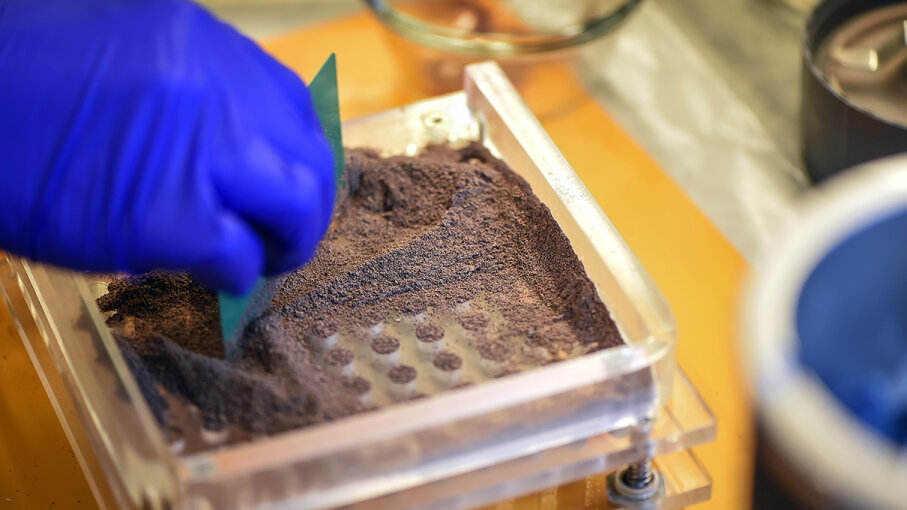 A placenta encapsulation specialist spreads the dehydrated and powdered placenta of a client into capsules following the birth of the client's baby. David Eulitt/Kansas City Star/TNS via Getty Images

Multivitamins have long been a postpartum staple for new mothers, but many are adding placenta capsules into the mix. Yes. They're having their placentas preserved and encapsulated. But, um, why would someone want to consume their own, until-recently, internal organ?

Ingestion of these placenta pills is said to stave off postpartum depression, a problem that affects one in nine new moms. The capsules are also said to increase milk supply and ramp up production of beneficial stress-reducing hormones, as well as oxytocin levels, which enhances the mother-baby bonding process and helps the uterus contract to normal, pre-pregnancy size. One of the major hurdles for the industry, however, is that no scientific studies have as yet been able to confirm any benefits, with all evidence currently anecdotal in nature.

The placenta serves critically important functions while in utero, including exchange of nutrients, waste and blood between mother and child. After birth, however, it is quickly rendered unnecessary and expelled from the mother's body. During the encapsulation process, the placenta is thoroughly steamed, dried and finally ground into capsules the mother can ingest.

Jenny Bennett, a Washington D.C.-area birth doula and childbirth educator with Expecting the Best Birth took placenta capsules following delivery of her second child, and describes a significant improvement in her postpartum mood in an email interview. "The placenta contains a lot of hormones so I felt that it helped those to balance out better than they had with my first, when I did not have it encapsulated," she explains.

Placenta consumption is hardly a new practice, although it has garnered a Western following in recent years, with particular help from celebrities like Kim Kardashian, who posted on her blog about having hers encapsulated. It has long been a staple of Chinese medicine, dating back centuries. It also has roots in nature. "The theory goes that humans are the only mammal that doesn't commonly ingest the placenta after birth, so it's interesting to think about the biological purpose of doing that," Bennett explains. "In the wild it's done in part to get rid of the smell in order to ward off would-be predators, but it's also possible there are other benefits related to the postpartum period."

Modern standards for professional encapsulation specialists are typically stringent, and the two main certification organizations are the Association of Placenta Preparation Arts (APPA) and the International Placenta and Postpartum Association (IPPA). According to Jules Gourley, LM, CPM (Ret.), owner and director of APPA, the curriculum there includes education in placenta anatomy, safety and sanitation protocols, the encapsulation process, current available research and postpartum mood disorders. Students must also complete bloodborne pathogen training and successfully encapsulate three placentas before receiving certification. It takes between six months and one year to complete the program.

The industry has come under added scrutiny recently with the diagnosis of an Oregon infant with group B Streptococcus agalactiae (GBS) bacteremia, which was eventually traced back to the placenta capsules her mother started taking after her child's birth. The Centers for Disease Control and Prevention (CDC) has since issued a warning against placenta capsule ingestion, saying, "The placenta encapsulation process does not per se eradicate infectious pathogens; thus, placenta capsule ingestion should be avoided."

Despite this, placenta capsule enthusiasts are hesitant to throw the baby out with the bath water just yet. It has been noted that the infection in the Oregon case was apparently present from the time of birth, which should have been caught prior to processing. "Infections are a contraindication for encapsulation, this includes any maternal or neonatal infection during or immediately after delivery," Gourley explains, noting that additional circumstances also preclude capsule ingestion. "Infections (such as mastitis) in the postpartum period indicate that the capsules should be discontinued temporarily. Because of a lack of research, clients that have chronic diseases and/or take medications should discuss placenta consumption with their doctors."

A midwife steams a human placenta and umbilical cord before she dehydrates it and grinds it into powder for placenta encapsulation.
Raphaelle Picard/AFP/Getty Images

Moms intent on pursuing a placental path should avoid risk wherever possible. Do not attempt to DIY placenta capsules, and thoroughly research and locate a reputable, safety-minded professional. "A trained specialist will ensure the placenta is at a proper temperature until it is processed, check the placenta for health as well as for appropriateness of ingestion, will ensure proper processing techniques, as well as be able to provide advice about use of the capsules," says Mandolin Restivo-Walsh, birth doula and placenta specialist with Brainy Birth in northern Virginia. "I recommend capsules that are processed by either steaming and then dehydrating the placenta, or by heat processing and dehydrating the placenta at 160 degrees [Fahrenheit] (71 degrees Celsius). Both methods provide protection against bacteria," she explains. The CDC says, however, there are no existing standards for processing placenta for consumption, and says heating to 130 degrees F (54 degrees C) for 121 minutes is necessary to reduce Salmonella bacteria.

Given its unresearched nature, it's probably best to stick only with capsules for the time being. They're one of the only two forms recommended by APPA (it also recommends placenta tinctures), although Gourley notes that some mothers — and even others — still choose to go the less conventional route.

"Some mothers may choose to consume placenta raw in smoothies, others do cook it as they would another meat into standard dishes," she says. "While APPA does not condone non-maternal consumption, in some cultures the placenta is consumed by family members, such as the father, sisters or even in some cases the extended family. We have also heard reports of some athletes utilizing the placenta for nutritional and hormonal supplements."

Now That's Cool
Requesting a placenta isn't as odd as it used to be, but it still pays to know the process before birth. Healthy placentas can be released to healthy mothers in all U.S. states, and is covered by state law in Texas, Oregon and Hawaii. So, talk to your doctor and birthing center well in advance to find out if you need to take anything to collect the placenta or fill out any necessary paperwork.