by Shanna Freeman
Prev NEXT
8 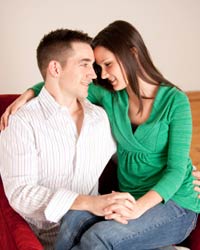 Not exactly appropriate in front of parents
©iStockphoto.com/JBryson

In case you're not familiar with the abbreviation in this context, PDA stands for public displays of affection. Love is grand, and showing it through actions like kissing, cuddling and holding hands is part of a healthy, affectionate relationship. However, your boyfriend's parents probably don't want to watch you fawn all over their son. It's awkward and uncomfortable enough for anybody to watch two people being incredibly affectionate with each other in public, but it's even worse when your child is involved. Yes, your boyfriend is an adult, but in some ways his parents will always think of him as their child. So keep your hands to yourself.

Maybe his parents are very open and won't care in the slightest if you hug or kiss in front of them, but most, especially during a first meeting, would consider it disrespectful. The focus should really be on your interactions with your boyfriend's parents, anyway.