How to Balance Baseball With Your Girlfriend 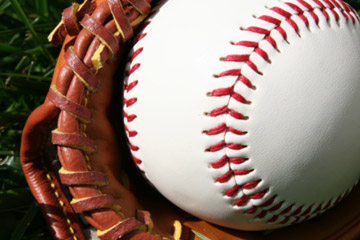 Image Gallery: Sports Do you find yourself defining your girlfriend as "a great catch?" See more sports pictures.
Hemera/Thinkstock

In the movie "Fever Pitch," Jimmy Fallon's character is so obsessed with the Red Sox that he turns down the chance to go to Paris with his sweetheart, played by Drew Barrymore.

If this sounds like you, then chances are good that your girlfriend feels like she's on the losing end of a competition with your love of the sport. And while there's nothing quite like seeing your team win the World Series, you also don't want to follow the same course as Fallon's character, who left a string of broken relationships in his wake.

It's true that there are plenty of women out there who would walk over hot coals for plum playoff tickets, but what if you have found a beautiful, intelligent woman who -- gasp -- isn't crazy about baseball? Is she doomed to become a "sports widow," described as "that long-suffering woman who keeps her significant other supplied with beer and chips while he sprawls on the couch watching endless hours of sport programming" [source: Russell]? If so, will she still be there when the season is over, or will you end up single every year by playoffs?

To find the answer, you'll have to ask yourself a few questions: Why did you pick someone who doesn't share your love of baseball? Do you two have plenty of other things in common? If she seems to resent the hours you spend with your sport, is she being unreasonable? Or are you the one who has a thing or two to learn?

If your girlfriend is wonderful in lots of ways, but just doesn't share your passion for the diamond (at least not the green kind), then you need to learn to find a balance between your sport and your relationship. If you put in the work, you can keep both of your true loves.

What is it about baseball that makes some people love it so? Read on to learn about why baseball is awesome.

Why is baseball so awesome?

What makes baseball so habit-forming, anyway? The answer isn't in the stats, the collectors' cards or even the beer -- the answer's between your ears.

First of all, we humans are social creatures, and we love to feel like we're part of a group. Being a fan gives you thousands of "brothers" who are rooting for the same team. Perfect strangers high-five each other in the mall when they realize they're both wearing Indians shirts. Local sports bars look like Mardi Gras when the home team wins the World Series -- it's a wonder Boston didn't implode when the Red Sox won the big prize in 2004 after an 86-year wait. And more than 90 percent of fans go to sporting events as a group, baseball included [source: Valeo]. All of this camaraderie is a big draw for a species that hates to be alone.

Not only does being a baseball fan get you lots of company -- it also gets you part of the glory. Dr. Edward Hirt, associate professor of psychology at Indiana University, did a study that found that when a guy's team won, he felt better about his own sports prowess, and about his sex appeal, too. When their team lost, though, guys felt worse about their own athletic abilities, and their chances of getting a date [source: UPMC]. At least one study showed that men's testosterone levels changed when they watched their sports teams win or lose [source: Bernhardt et al]. So, while most of us will never hit like A-Rod, we can feel a big high when we watch him do his thing.

Testosterone isn't the only body chemical that can change when you watch baseball. Candace Pert explains in her book "Molecules of Emotion" that the brain is bathed in "pleasure chemicals" when we do things we love, like watching baseball [source: Valeo]. Most of us manage to control pleasure-seeking behavior, but sometimes we can get stuck in a trap of compulsive behavior to avoid the bad feelings in life. This can lead to behaviors like compulsive gambling, sex addiction, and, yes, baseball mania. When something you do interferes with the other parts of your life, like work, family and dating, then you've got a problem [source: Valeo].

"Baseball is not necessarily a god for some people, but it's a part of what satisfies that yearning to be part of something bigger than they are" -- Kevin Quirk [source: Valeo].

How did things get so out of balance?

Things are out of balance when your love of baseball leads to consequences in the rest of your life. Maybe your work is suffering because you always take time off to watch the game, or maybe you're broke because you've filled your whole house with memorabilia. In "Fever Pitch", Jimmy Fallon's character keeps losing girlfriends to his love of the Red Sox. Hopefully, your relationship isn't headed the same way.

Why do some fans take their love of the game so far that it messes up the other parts of their lives? Sometimes a person can use baseball as an escape. When you're in your favorite recliner with a beer and a plate of hot wings, yelling at the ump along with the gang, the rest of the world seems to just disappear. It can feel so liberating, in fact, that it can lead to a Fever Pitch-like situation. The movie, after all, was based on the memoir of novelist Nick Hornby, who became obsessed with soccer after his father took him to a game following his parents' separation when he was 11. Hornby later realized that part of the reason he was so hooked on soccer was the connection the sport gave him with his father [source: Valeo].

The irony about using baseball to avoid your problems, though, is that it just makes more problems. A baseball fix is so easy to get nowadays, between satellite TV and the Internet, that a fan who's not careful could wind up practically living and breathing the sport. If this is you, and your girlfriend keeps complaining about it, then you might just be the one with the problem. After all, you can hardly blame her for being upset if you spend half your waking hours with your face glued to your TV or laptop, and the only rose you ever gave her was a picture of ol' Pete.

If your girlfriend is upset about the amount of time you spend on baseball, think about it. If she expects you to only do what she wants to do, then she's probably not "The One." But if the two of you have lots in common besides baseball, and you're spending more time with your sports buddies than you are with her, then you need to learn to bend a little.

Read on for suggestions on how to compromise.

When It's Gone Too Far

"If a man watches three football games in a row, he should be declared legally dead." -- Erma Bombeck [source: Russell]

Tips for Balancing Baseball With a Girlfriend 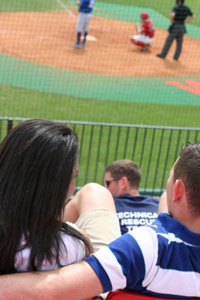 How about taking her on a date to a game?
iStockphoto/Thinkstock

First, take a long, hard look at your baseball behavior. Be honest with yourself. If your fandom has become such an obsession that it fits the American Psychiatric Association definition of a disorder because it "is associated with present distress… or impairment in one or more important areas of functioning," then you are the one with the problem. You need to learn to control your baseball habit and restore balance in your life. Author Kevin Quirk, who wrote a book about sports obsession because he's been there, says that out-of-control sports fans can get more balance in their lives by cutting back on their sports time, as hard as that may be. One way to help you cut back on baseball and put more into your relationship is to "take the sharp focus and unbridled emotions you display as a sports fan and bring them into your relationship with a woman." Your honey will definitely notice the change [source: Quirk].

Quirk says that another way to restore some balance is to invite your sweetheart to learn a little about baseball, if she's willing. Set up scheduled times for "lessons," when you teach her the fundamentals of the game and share with her what you love about it. (Note: This does not mean quality time when she sits and watches you yell at the TV.) But what if your girl has a perfectly good understanding of baseball but just isn't up on your team? In this case, "lessons" could be a casual talk about the current roster, the team's prospects and the club's history -- followed by a date to a live game. This goes both ways, though: Talk with her and agree on something she enjoys and wants to teach you, and you want to learn about, and schedule just as much time for her to be the teacher. That way you will learn more about each other's interests, you'll spend more time together, and she won't feel so left out of the whole baseball thing.

If your girlfriend has no interest in baseball whatsoever, but has plenty of interests of her own, there may still be hope. Talk with her and make sure you spend enough time together to keep both of you happy, and enjoy a reasonable amount of baseball time while she goes for a jog or visits with friends. You can even negotiate a special schedule during playoffs, and maybe plan a special post-World Series date night of her choosing. As long as you communicate and compromise, a patient woman will still be there when the season is over.

Love at First Sight? A Study Says It's Probably Just Lust
Not Getting Online Dates? Your Bar Is Probably Too High
How Men and Women Use Body Language to Flirt