How to Propose to Your Girlfriend

Browse the article How to Propose to Your Girlfriend 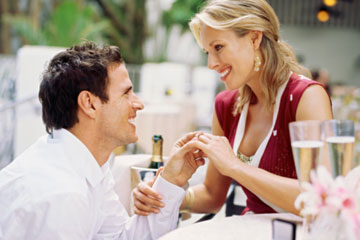 Tailor your proposal to fit your girlfriend's personality, and you're sure to get a yes.
George Doyle/Stockbyte/Thinkstock

So you've splurged on the perfect engagement ring and you're ready to pop the question to the girl of your dreams -- now what? Many grooms-to-be struggle to find just the right words and the best place to stage the perfect proposal. After all, she's dreamed of this moment her entire life, so you don't want to disappoint her. Plus, you'll probably be telling the story of your engagement many times over the coming years, so you want to make sure it's a good one. Above all, you want her to know just how much you love her, and of course, you want to make sure she says yes!

To create a memorable proposal moment, tailor your proposal to fit her personality. Don't ignore what you know about your bride-to-be in an effort to go over the top or to attempt something none of your friends have done before. Enlist family and friends to help you decide on the perfect plan, and practice what you'll say ahead of time so you feel more comfortable when it's time to pop the question.

No matter what type of proposal you decide on, there are a few things you should avoid doing when you're planning to propose. First, don't ask her to marry you before the time is right. If you've never talked about marriage and sharing a future, you're better off waiting until later in the relationship. Next, avoid overcomplicated proposal plans that leave you so busy and stressed out that you can't enjoy the moment. You could also get so lost in the planning process that she starts to get suspicious and wonder what you're up to. Simple plans are more likely to go smoothly and reduce your risk of proposal disaster stories. Finally, don't hide an expensive engagement ring in food. Not only is this a messy proposition, but you also face the risk of a night at the emergency dentist or doctor if things go wrong -- not exactly romantic.

Now that you know what to avoid, take a look at some of these romantic, creative and traditional proposal ideas, and find one that's best suited to your relationship. 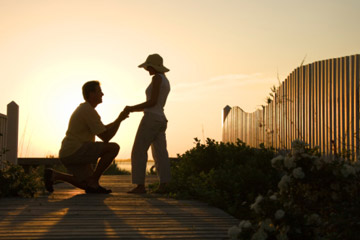 A proposal on the beach at sunset is hard to beat in the romance department.
Comstock/Thinkstock

If your girlfriend loves red roses and quiet dinners for two, focus on romantic proposal ideas that illustrate just how much you love her and want to share your life with her. While every marriage proposal is romantic at heart, you'll find no shortage of ways to up the ante and create the ultimate romantic proposal for the woman of your dreams.

An unforgettable location offers the perfect way to set the scene for romance. Whisk her away to her favorite city or somewhere she's always wanted to go. Propose at the Eiffel Tower in Paris, in a gondola in Venice or in a quiet corner of Central Park in New York City. Drop to one knee in front of Cinderella's Castle at Walt Disney World or in the middle of the National Mall in Washington D.C. Think of places that have meaning for the two of you, and then use these spots as the backdrop for your proposal. A location with an incredible view can also help you create a romantic and memorable proposal moment. Try an overlook at a nearby park, an observatory downtown or a serene mountain setting. Beaches and other tropical spots also provide a hard-to-match sense of romance.

If buying the engagement ring has stretched your budget to the limit, don't worry. Romantic proposal moments are about sharing your love, not flying to exotic and expensive cities. You can still give her a thrilling and romantic engagement story by proposing at her favorite restaurant or any special spot in your town. Incorporate an item you made yourself, such as a handcrafted wood box or a poem, to up the romance factor. If you'd rather propose at home, create a trail of rose petals leading from the front door to the bedroom, and place the ring at the end of the trail. Dress up in a nice suit or rent a tux, and drop to one knee as you ask for her hand.

Above all, keep the proposal heartfelt, and allow your feelings for her to help you choose the right words as you pop the question. Create a proposal that's all about the two of you.

If you're the type who likes to do things a little differently, read on for some more creative proposal ideas.

A one-of-a-kind proposal shows your girlfriend that you're willing to go the extra mile to win her heart, and the best part is, you can easily tailor the experience to create a private moment or make a big splash. Before you start coming up with creative ideas, however, think carefully about the kind of proposal she might have in mind. A shy woman may not want to see her name written in the sky, for instance, while a more outgoing girl may be thrilled by a very public proposal. Rather than going for the craziest and most unique proposal you can think of, let your creative side shine by proposing in a way that touches her heart and fits her style.

When you know your girlfriend won't mind being the center of attention, try hijacking the microphone at the next party you attend together. Get the DJ's approval first, of course, and then make your announcement in front of all your friends and fellow guests. This option also works at major sporting events, where you can even rent ads on the big screen to pop the question with a bang.

For an even bigger surprise, consider renting a billboard along her regular route to work. She'll be surprised and touched that you went to so much trouble. You can also take a slightly less public (and more affordable) approach with an ad in her favorite newspaper or magazine.

To add a creative twist to the traditional proposal, send her on a scavenger hunt around town, or just around the house. Leave sweet notes at each stop telling her all the things you love about her, with clues directing her to where the next note is hidden. The final note should lead her to you, waiting on bended knee.

Guys with serious tech skills can take the engagement process to the next level by building a custom Web site for the one they love. Create pages detailing all the things you love about her, and post the big question on the home page. Slip her a card or note showing the Web address, but let her figure out for herself what it's all about. Not only will she be wowed by your creativity, she'll be able to forward the page to all her friends to share the big news.

Read on to learn about traditional marriage proposal ideas for a more classic approach to engagement.

In 2009, a videotaped proposal at Disneyland quickly went viral. In the video, a groom-to-be enlists the help of hundreds of Disney cast members and guests to create an unforgettable sing-a-long style proposal. Many men were left wondering how they'd ever match this level of creativity when it came time to propose. If you're one of them, relax. Disney quickly admitted that the entire scene was an elaborate marketing ploy designed to get people excited about the park's new Celebrations program.

Not all women want to be the center of attention in a crowd or at a sporting event. Those looking for a more traditional option should stick to classic proposal ideas and avoid elaborate gestures.

Once you've decided that a traditional proposal is the way to go, start by talking to your girlfriend's father. While some may feel this idea is out of date, more than 80 percent of women feel this tradition is still important, according to a survey by Men's Health. Skip this step if she's not close to her father, or if you think it would make her uncomfortable.

One option for a traditional marriage proposal involves getting down on one knee at a family gathering. This way, both sides of the family get a chance to intermingle before the wedding and share in your big moment. Remember that this type of public proposal will only work if she's close to her family and if you're sure she'll say yes. If you're unsure, ask her sisters or mom what they think before you start planning.

Of course, not every woman wants her family involved in this intimate moment. For a different approach that's still rich in tradition, take her out to dinner at a nice restaurant. One benefit of proposing at a restaurant is that you can make it as private or as public as you'd like. Get down on one knee if you wish, but prepare for applause and cheers from fellow diners. You can also incorporate the waiter into your plans to keep things more private. Ask him to bring the ring out with dessert or champagne at the end of the meal, or have the chef spell out your proposal on the edge of the dessert plate. If the weather's nice, plan a picnic in the park and ask her to marry you in a more relaxed and natural setting.

Create your own traditions as a couple by taking her back to the scene of your first date or where you met when you're ready to propose. Whether you first locked eyes at a busy train station or shared your first date at a bowling alley, she'll appreciate the romance behind this gesture.

If you want to keep things as intimate as possible, propose at home. Ask for her hand as you sit next to the Christmas tree or over a dinner you've cooked just for her. Celebrate this special moment as a couple, and savor the privacy that only an at-home proposal can provide.

For more proposal ideas, and information on engagement and marriage, click to the next page.

You've probably seen some of the "proposals gone wrong" videos that have spread across the Web over the past few years. Each one shows a guy getting down on one knee at a major sporting event, including a Yankees game, an Orlando Magic game and a football match at Beaver Stadium. After he proposes, the frightened girlfriend turns him down or even runs away, leaving the man embarrassed and alone. If these videos have left you gun shy, don't worry. Each one was faked by event organizers to help liven up the game.