When is the right time to say 'I love you'? 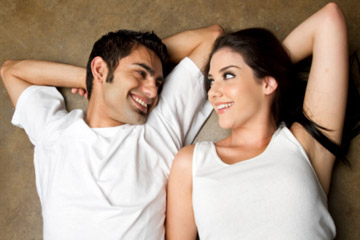 The words are on the tip of her tongue.
iStockphoto/Thinkstock

I love you -- three little words packed with tons of meaning. If both people in a relationship are ready to profess their love to each other, boldly declaring those words can convey a sense of happiness beyond compare. But if one person isn't ready to hear it, even the sweetest and most promising relationship could nosedive into an awkward tailspin.

Love is one of those four-letter words that can make you gush with happiness or retreat into humiliation. Much of the confusion about saying "I love you" comes from the fact that love has many different definitions. For some, love means feeling especially close to another person. For others, "I love you" is tantamount to asking, "Will you marry me?"

Another problematic aspect of saying "I love you" is that some people are uncomfortable with talking about love or relationships in general. If your significant other grew up without hearing his or her parents say those three special words to each other, he or she might be uncomfortable saying it to you.

Then, there's the issue of commitment. If your partner is uneasy about saying "I love you," it might be a sign that they view the expression as a fetter that binds them to a relationship they're not ready for. Some people even use the words manipulatively. Saying "I love you" is another way of saying, "You can't break up with me -- it would hurt me too much."

Before we talk about when is right to say those three magic words, let's look at when you definitely shouldn't say "I love you:"

So, when is the right time to say "I love you?" It's usually best to wait at least a few months into a relationship that you're confident will last. After you've determined that you're in it for the long haul, you should talk to your significant other about your feelings to see if you're on the same page. Ask your partner if he or she could picture a future with you and if he or she feels like you're a good match. By testing the waters, you'll not only find out how your significant other is feeling, you'll also put your feelings on the table and prepare him or her if you do decide to say "I love you." Also, say it in person, rather than over the phone or through e-mail. That way, you can read body language to get a sense of how your significant other is feeling.

Taking the time to decide when you're ready to say "I love you" will prove worth the wait. After all, nothing is more meaningful than knowing that someone loves you and you love them in return.

Should I be the one to say "I love you" first?
How to Know If You're Ready to Move In Together
How to Get Out of a Bad Date

Why Do We Fall in Love?
This Is Why Humans Don't Have a Mating Season
10 Tips for Meeting Your Boyfriend's Parents