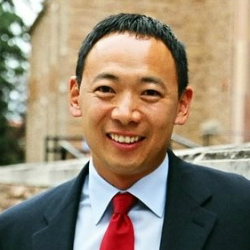 This summer, more than 700,000 couples in the United States will vow to love each other forever when they affirm their wedding vows. There is no task more important in life than to love, but forever is a long time, so it’s important to think carefully about what it means to say, “I do.”

Two summers ago, some friends began asking me to officiate their wedding ceremonies. As I prepared for this new and important task, I became particularly intrigued by a familiar passage, “…for better for worse, for richer for poorer, in sickness and in health, to love and to cherish, until death do us part.” Originally written in the 16th century, these vows still seem like fine goals for marriage. However, the context surrounding marriage has changed dramatically since these vows were first written, and I began wondering whether couples know exactly what they are agreeing to do.

Let’s start with a simple, but important question: How long is forever? Until the mid-1800s, couples could expect about forty years of marriage before parted by death, but the longer life expectancies today mean that couples can expect 60 years of marriage. This might sound like a long time and when one considers that almost half of marriages end in divorce before year 20, 60 years sounds like a very long time.

Maybe some of the challenges to marriage, such as sickness, poverty, or worsening psychological health, make it particularly difficult for modern newlyweds to uphold their vows to love and cherish forever. In the weeks to come, I’ll look at the latest science to address these questions and provide advice for those of you contemplating the important decision to say, “I do.” What do you think? Are the marriage vows outdated or still a nice tradition?

Ty Tashiro received his Ph.D. in psychology from the University of Minnesota. His research has appeared in top-tier academic journals and he was awarded Professor of the Year at the University of Colorado and University of Maryland. He is often cited as an expert on relationship breakups, enhancing long-term relationships, and online dating. He is currently completing his forthcoming book titled, The Science of Happily Ever After: Why We Choose the Wrong Partners and the Three Wishes that Matter in the Quest for Enduring Love. He lives in New York City.

How should you deal with a depressed spouse?
Does living together before marriage lead to divorce?
How to Propose to Your Boyfriend

Should I be the one to say "I love you" first?
Is it love or lust?
Left at the Altar: 10 Reasons He Got Cold Feet