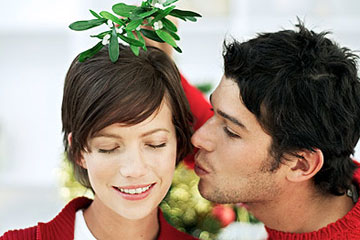 Mistletoe is easy -- but what about gift-giving and family events over the holidays?
George Doyle/Thinkstock

The holiday season brings to mind such wonderful thoughts! Love, happiness, joy to the world ... but it can have its dating drawbacks — issues that you have to face in order to get through this festive time successfully (fellas, this is strictly for the ladies, so read on with that in mind).

Here are the three issues that cause the most problems between couples during the holidays:

So here are a few tips to help you recognize the problem and then display the proper reaction.

For some of you the gift-giving part of the season may be wrought with disappointment and confusion. That's because every year the same dilemma seems to rear its ugly head: You and your man always tend to break up during the holidays ... over gift giving. What causes this problem and why is it usually the man who wants the break up?

First of all, it usually isn't a problem for "real" men, because they are not worried about whether to buy you a gift. If you have been dating for a while — and you have that kind of relationship — then he will want to get you something. But if he is cheap, broke or has ego problems with giving a woman anything (this probably isn't the only time of year he winces over buying you something), then don't expect him to come through and do expect him to find an excuse to break up.

Typically, this is an issue that comes up between young people who are dating, and should not be a factor in your relationship after both of you have reached real maturity. However, if you find that he still seems to get uneasy with your relationship during the holidays, you need to discuss it. Find out what makes him uncomfortable about it. Is it that he feels it's a statement of commitment to give you a gift? If he is not ready for commitment, he may feel that way. What if he doesn't really celebrate the holidays? That's something you need to know.

Is it because he doesn't have the extra money? Well, that is kind of a cop-out because women usually appreciate the thought — as opposed to the price — of the gift (not all women, but most do).

You can head off the whole "Gift-Giving Break-Up" (GGBU) thing by paying attention to how he has behaved at other times of the year. Has he been the kind of guy who gives gifts often? Or has he never bought you anything? Also, have you ever given him anything, and if so, was he comfortable receiving it?

On the other side of the coin, if he has ever given you something small or inexpensive and it came from his heart, but you showed no appreciation for it, that may be an indicator that you are about to be a victim of the GGBU. Think about it.