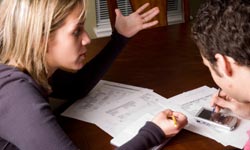 Money problems are the source of many arguments between couples and can cause a man to get cold feet.
©iStockphoto.com/Kris Hanke

Discussing your financial situation with somebody else can be very uncomfortable, but if you're going to get married, it's a necessity. Even if you keep separate bank accounts, you're going to have shared bills and you'll need to decide who will be paying for what. You'll also probably be making large purchases together such as cars and houses, and you'll need to plan for the future with things like savings accounts, 401(k)s and IRAs. But what happens if the groom-to-be believes in spending like there's no tomorrow, while his fiancee is a tightwad? Or what if she's a shopaholic and he carefully watches every single penny?

Because it can be so difficult to discuss, some people avoid it altogether. Maybe the man hasn't been entirely honest about his financial situation, whether it's good or bad, and realizes that it's going to all come out once they get married. Some couples also pay for their own weddings, and seeing how his future wife spends that money might be troubling. Regardless of exactly what's going on, a man may get cold feet because of his own money situation or the financial differences between him and his fiancee.