by David Popenoe
Prev NEXT
10 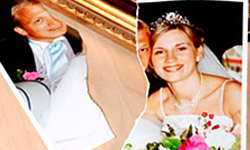 Myth: Because of the high divorce rate, which weeds out the unhappy marriages, people who stay married have happier marriages than people did in the past when everyone stuck it out, no matter how bad the marriage.

Fact: According to what people have reported in several large national surveys, the general level of happiness in marriages has not increased and probably has declined slightly. Some studies have found in recent marriages, compared to those of 20 or 30 years ago, significantly more work-related stress, more marital conflict and less marital interaction.