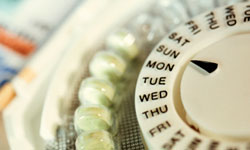 The FDA approved "the pill" to prevent pregnancy in 1960.
Diane Macdonald/Getty Images

When Enovid, the first birth control pill approved by the U.S. Food and Drug Administration, hit the market in 1960, American women were eager for the option. Previously cleared as a treatment for menstrual disorders in 1957, Enovid was already making the rounds among gynecological practices, with half a million prescriptions doled out ostensibly to regulate periods [source: PBS]. When the pill turned 40 in 2010, an estimated 100 million women around the world were using oral contraceptives, primarily to prevent pregnancies [source: TIME].

Birth control pills prevent pregnancy by inhibiting a woman's ovaries from releasing a mature egg into the fallopian tubes during monthly ovulation [source: Planned Parenthood]. Typically, oral contraceptives combine the hormones estrogen and progestin to maintain a routine menstrual cycle, sans ovulation. In doing so, birth control has granted women greater agency over their bodies and their reproductive systems, allowing them to better manage if and when motherhood happens. As a side effect of reducing the pregnancy risk, the pill also opened the door to greater sexual freedom.

But eliminating ovulation may also affect women's sex lives in more subtle ways, recent studies are starting to show. In the process of tricking a female body into thinking it's pregnant, oral contraceptives may discretely alter heterosexual women's attraction to men and vice versa. Although none of the following five birth control-related reactions pose any direct risk to women, they're fascinating examples of how a single, tiny egg can make a monthly difference.