History of the Pill 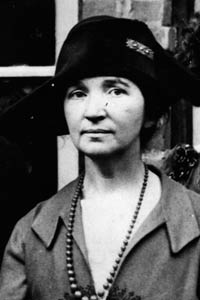 In 1950, Margaret Sanger met with Dr. Gregory Pincus, a biologist. Pincus had read the current studies on progesterone and believed it was possible to create a drug from it that would prevent ovulation, but he needed funding. Some of the money was provided by Planned Parenthood, while Katherine McCormick, one of Sanger's wealthy supporters, eventually provided more. A progesterone pill had already been created by chemists at two different drug companies, Searle and Syntex, and had already been tested on infertile women by gynecologist John Rock, but neither Sanger nor Pincus were initially aware of this.

Rock and Pincus joined forces in 1954 to conduct the clinical trials required to get FDA funding, with pills provided by Searle. Initially, the pills from Searle were all progesterone. When Rock and Pincus received some pills "contaminated" with estrogen, they discovered that the combination helps to reduce some problems like spotting. In 1956, after further trials in Puerto Rico (done in order to skirt stateside laws against birth control) they concluded that the Searle formulation was the perfect oral contraceptive.

In 1961, the FDA approved the sale of the combination pill, under the name Enovid, by the drug company Searle. Other companies struggled to catch up, and Syntex came out with its own pill under the name Ortho Novum in 1962. A year later, more than 2 million women were on the pill.

Despite its growing popularity, the pill suffered a setback in 1970, when the FDA conducted hearings on its potentially dangerous side effects. Eventually, scientists decided that taking formulations of the pill that contained lower levels of estrogen reduced the incidence of these side effects without reducing the pill's effectiveness. They also concluded that women who smoked while on the pill had the biggest increase in risk. More companies come out with low-dose versions of the pill, and all of the original high-dose versions were taken off the market in 1988.

For more articles you might be interested in, from how Planned Parenthood Works to how a male birth control pill would work, try the links below.