The Birth of the Modern Condom 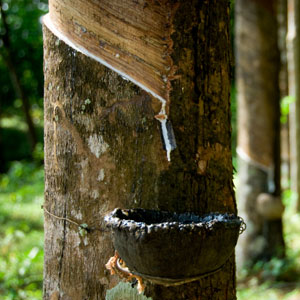 This rubber tree on Ko Lanta, off the western coast of Thailand, is being tapped for its latex.
© iStockphoto/resonants

­Tapping rubber trees was a long-held tradition among South­ American indigenous peoples before the arrival of European explorers. But it wasn't until Charles Goodyear discovered vulcanization in 1839 that rubber took its place in contraceptive history. Straight from the Hevea brasiliensis tree, liquid rubber, or latex, turns into a substance that's bouncy but brittle. Goodyear used sulfur and lead oxide to strengthen the bonds between the rubber's molecules, which made it stronger, more elastic and less likely to break down over time. You can read about exactly how and why vulcanization works in How Rubber Works.

Buying one of the earliest rubber condoms wasn't always as simple as taking a trip to the local pharmacy. Often, men had to visit their doctors to be professionally fitted. Rubber condoms were considerably thicker and rougher than the condoms used today. Some of the earliest covered only the glans, or tip, of the penis. Rubber condoms were often advertised as reusable, wash-and-wear prophylactics. They had a relatively short practical life, however, especially if used with oil-based lubricants, which broke down the rubber.

In 1919, Frederick Killian broke away from the original method of rubber condom-making, which involved molding vulcanized rubber. Instead, he dipped molds directly into liquid latex. This led to thinner, cheaper latex condoms, and they had a longer shelf life. Soon, factories were mass-producing condoms by dipping glass molds in vats of latex and using ovens to vulcanize the material.

Latex condoms dominate the market today. Natural membrane condoms are still around as well. They're often known as "sheepskin," although they're made from intestinal linings rather than skin. The newest condom materials include polymers like polyisoprene and polyurethane. Today, doctors typically recommend natural membrane and polymer condoms only when one partner has a latex allergy or when disease prevention isn't a priority, such as in monogamous couples who have no sexually transmitted infections (STIs).

Today, latex condoms make up more than 99 percent of condom sales worldwide [source: Gerofi]. In the next few sections, we'll focus on how they are made, tested and marketed.

The word "rubber" is synonymous with the word "condom" for obvious reasons. But many of the condom's other nicknames throughout history have taken a creative turn, including: