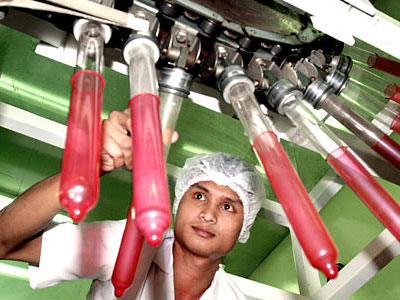 The latex used to make condoms comes from tapping rubber trees in Brazil, Southeast Asia or West Africa. The sap runs down from spiral grooves in the trees to be collected in buckets. But sap isn't the only ingredient in the latex condom. When it's ready to be made into condoms, the latex can contain:

Many of these ingredients add to the shelf life of the latex, but they also make rubber -- a naturally biodegradable substance -- harder to break down. That's why used condoms should go in the trash, not down the toilet, where they can wreak havoc with plumbing, septic and sewer systems.

In the factory, the liquid latex goes into vats. Glass or ceramic molds, or formers, suspended from a conveyor belt dip into the vats, turning as they go so the latex coats them evenly. The latex-coated formers are dried, and they take a second -- and sometimes a third -- trip through the vats to make the condoms thick enough to use. The amount of water in the latex also affects the condoms' thickness -- the more water, the thinner the condom.

A brush rolls down the latex at the tops of the formers to create the rim at the open end of the condom. Once the dip-and-dry process is done, the formers travel through a tunnel oven, which uses heat to vulcanize the condoms. From there, the condoms are removed and washed in large washing machines to remove odors, allergens and pathogens.

After quality testing, which we'll discuss in the next section, the condoms are ready for packaging. Machines apply lubricants as the very last step before the condoms go into their foil wrappers. Typically, the condoms are sandwiched between two layers of laminated foil. The packaging has to keep out air and ultraviolet light, or the condoms will deteriorate. The condoms also have to include an expiration date within five years of the condoms' manufacture.

Machines seal the foil and make perforations where necessary, and the last step on the conveyor is into the condoms' exterior packaging, typically a cardboard box.

So how do manufacturers know that these foil-packaged condoms are free from holes and defects that could kill their prophylactic potential? Read on to find out.