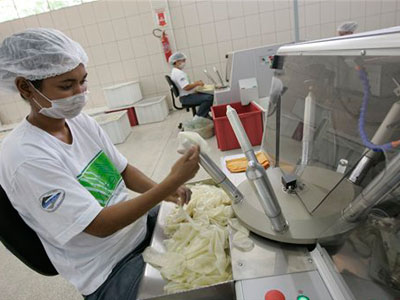 There are three b­asic things that can go wrong with a condom during use. Starting with the worst, they are:

Manufacturers test random samples or whole batches of condoms to cut down on the chance of breakage and leakage. Since the heat and sharp edges required to package condoms could also damage them, a second set of quality assurance tests takes place at the end of the line, before the condoms leave the factory.

Several tests focus on condoms' tensile strength, or strength during stretching. In one test, a pair of rollers moves apart, stretching a ring cut from the middle of the condom to make sure it can stretch far enough before breaking. Inflation tests also evaluate condoms' strength -- if the inflated condom bursts before it's reached the right volume, it fails the test.

Photo courtesy Enersol Inflation tests measure how much air a condom can hold -- and how far it can stretch -- before it breaks.

To test condoms for leaks, technicians fill them with water and hang them up for a few minutes. Workers can visually inspect the condoms for signs of leaks, but a more accurate test involves rolling the filled condom on absorbent paper.

Another leak test, which has a wet and a dry mode, requires electricity. In the wet test, condoms form an insulating layer on metal rods dipped into a conductive solution. When electricity passes through the solution, it also passes through any holes or thin spots in the condoms. A computer detects the current and determines which condoms fail the test. The dry test uses a more powerful jolt of electricity. A conductive material passes over condoms on electrified metal rods, and current passes through holes or thin spots, melting or burning the affected condom.

These tests don't focus on condom slippage -- that has more to do with how the condom is used than the condom itself. So what's the best way to use a condom so it doesn't slip?

Some Condoms Not For Use with Some Tests

These tests are typical for latex condoms. Membrane and polymer condoms go through testing as well, but there are fewer standardized procedures and different passing and failing grades.