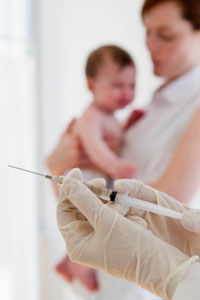 One of the most long-lasting, promising male birth control methods in development is a gel injection.
Jamie Grill/Getty Images

One of the most promising male birth control options under investigation doesn’t involve popping pills, fiddling with remote controls or toting around bulging implants in one’s forearm. Attracting widespread media coverage since 2010, Reversible Inhibition of Sperm Under Guidance (RISUG) is a one-time gel injection that acts almost instantly to incite infertility in men. Developed 30 years ago by Indian scientist Sujoy Guha, RISUG, also known as VasalGel, sterilizes men for 10 to 15 years and also is completely reversible with a follow-up injection that dissolves the gel, according to human trials to date [source: Gifford].

The “gel” in VasalGel consists of a nontoxic polymer -- powdered styrene maleic anhydride combined with dimethyl sulfoxide, to be scientifically specific -- that coats the interior of the vas deferens and immobilizes sperm on their mass exodus out of the penis [source: Male Contraception Information Project]. The gel barrier not only makes it more difficult for sperm to squeeze through the confined tubing, but its chemical charge also fatally damages sperm membranes. So far, Indian men who have undergone a RISUG treatment have encountered no unintended pregnancies and experienced no secondary physical or sexual side effects [source: Gifford].

Why aren’t sexually active men everywhere lining up for a RISUG shot? As of this writing, the treatment is still in the clinical testing phases, but the scant attention it has received from pharmaceutical companies portends an uncertain future for male birth control.