From Germs to Sperm: The History of RISUG 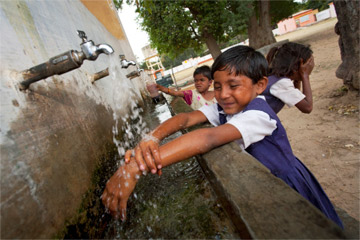 Guha got the inspiration for the male contraceptive RISUG when he was working on ways to fix India's water supply.
Anna Henly/The Image Bank/Getty Images

The brainchild behind RISUG is Sujoy Guha, a graduate of the Indian Institute for Technology in Kharagpur. Over his long career, Guha has brought inventive, original thinking to a variety of problems. In the 1960s, while at St. Louis University's School of Medicine, he teamed up with another researcher to develop a method for simulating the flow of blood through the human body. They tried a number of mechanical pumps, but none created the rhythmic ebb and flow of a normal circulatory system.

That led them to study the effects of a magnetic field on weak salt solutions resembling blood. The researchers made an interesting discovery: If they arranged electromagnets in the proper configuration, they could make the ions in a salt solution move in one direction. What's more, the electrically charged particles would actually pull water molecules along with them. When they assembled a prototype of a pump based on the principle, they found they could generate a jet stream of water without producing noise or vibrations. Such systems, known today as magnetohydrodynamic propulsion units, caught the attention of ship manufacturers and fiction writers. Tom Clancy based the electromagnetic "caterpillar drive" featured in "The Hunt for Red October" on Guha's ideas.

By then, the Indian researcher had moved back to his homeland -- and on to other projects. In the 1970s, he began investigating cost-effective techniques to purify rural water systems. He discovered that if he coated pipes with a common polymer called styrene maleic anhydride, he could kill bacteria lurking in the water supply. The process took advantage of an electric charge differential existing between the polymer, which was positively charged, and the bacteria cells, which carried a net negative charge. As microbes traveled through the polymer-lined pipes and encountered the strong positive charge, the attractive forces pulled them apart.

When the Indian government began worrying about its rapidly growing population, Guha wondered if the same polymer could work for male contraception. After all, the vas deferens resembled a water pipe, and sperm traveling through the narrow tubes were analogous to bacteria. Guha ran some tests and found that the procedure worked perfectly -- male rats whose reproductive plumbing received injections of the polymer didn't make any baby rats. Guha published a proof-of-concept paper in 1979, then began studying the procedure in rhesus monkeys. By the time he published the same positive results in 1985, he suspected RISUG might be a major breakthrough in the quest for better birth control. To understand its significance, it helps to understand the male reproductive system and the potential targets for contraception. That's where we're headed next.