The Science of Vasectomy 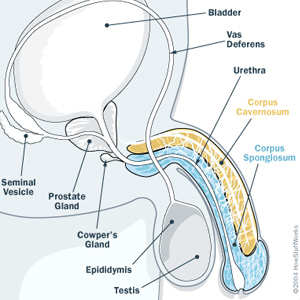 During sexual reproduction, a man's body ejaculates, or discharges, sperm into a woman's body in an attempt to create a pregnancy. To understand how vasectomy works you'll first need to understand the mechanics of ejaculation.

When a man has a vasectomy, both of the vas deferens are cut, blocked or tied to prevent his sperm from traveling out through the urethra during sex. However, a vasectomy does not work immediately. Because sperm are continuously being created in the testicles, housed in the epididymides and carried towards the urethra, it can take several months for existing sperm to completely clean out of the reproductive system. During this time another form of birth control must be used to prevent pregnancy [source: Davis]. After vasectomy, there should be no noticeable change in semen quality or quantity. The testicles will continue to produce sperm after vasectomy, where they are absorbed by the body and vanish over time [source: National Library of Medicine].

Though the procedure ranges from several hundred to more than a thousand dollars, many health insurance policies, Medicaid and social service programs cover vasectomy with little to no out-of-pocket payment required [source: Planned Parenthood].