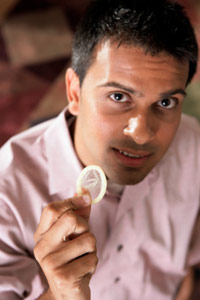 Patients are instructed to use a back-up birth control method for several months after the procedure. Most post-vasectomy pregnancies occur simply because couples fail to do this.
Medioimages/Photodisc/Thinkstock

Many of us have heard the sometimes sad and sometimes humorous stories of couples who became pregnant after a man had had a vasectomy. While vasectomy is a highly effective birth control method, it is not fail-proof. Rarely, men that have had vasectomies father children after the surgery.

Possible reasons for failed vasectomy include:

When scientists observed pregnancy rates of women after their partner's vasectomy, the risk of vasectomy failure appeared to be about 10 in 1,000, or a 1 percent chance of getting pregnant within several years after vasectomy. Most of these accidental pregnancies occurred within six months after vasectomy, and half of the pregnancies occurred within three months of the procedure, during the fertile window [source: Jamieson, et al.]. Remember: It takes several months for sperm to completely clean out of a man's system after vasectomy. This reiterates the importance of being cautious and using a second method of birth control for several months after your vasectomy.

This still leaves a number of unexplained post-vasectomy pregnancies. How can a vasectomy fail if a couple avoids sex during the fertile window? One explanation is a phenomenon called recanalization, which can occur after a vasectomy. During recanalization, a mass of cells starts to grow between the two cut ends of the vas, and the vas deferens is able to reconnect itself, allowing sperm to travel through the vas once again. Often, a man doesn't know this has happened until a pregnancy occurs. At times, recanalization is diagnosed when a routine post-vasectomy semen analysis fails, but other times it occurs years after the vasectomy [source: Xiaozhang]. Sometimes, doctors will cut and remove a small section of the vas deferens during the vasectomy to prevent this rare complication [source: American Urological Association Foundation].