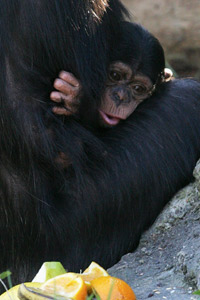 A primate mother who enjoys intercourse enough to take multiple partners may be able to confuse males into accepting another's baby as their own.
Matt Blyth/Getty Images

Men and women experience similar physiological changes during orgasm, the climax of sexual intercourse. It typically lasts less than a minute [source: Discover]. In both sexes, the rectum contracts at intervals of approximately 0.8 seconds; there is less voluntary muscle control; and lots of muscles all over the body start to spasm. And then of course there's the laundry list of pleasure chemicals, like oxytocin, norepinephrine and serotonin, that saturate the brain like a flash flood of indescribable joy. In women, the muscles in the vagina and the uterus go through a series of contractions, as well [source: Discover].

These contractions of the vagina and the uterus are the basis for one of the many evolutionary explanations of the female orgasm -- the sperm retention theory. Some researchers hypothesize that when the vagina and uterus contract, they retain more sperm, possibly due to the way they close up and related to some sort of suction created by the contractions. This suction could reduce the amount of sperm that drips out of the woman's body after sex, meaning more sperm would get a shot at reaching an egg.

Another theory in the sperm-retention realm states that an orgasm tires a woman out, causing her to lie on her back for a long time following sex. This would theoretically cause more sperm to stay inside her than if she were standing up, with gravity taking effect.

Critics point out, though, that there is no proof that either contractions or lying prostrate actually aid in sperm retention. (Some even say that the contractions produce an expulsion force, not a suction force [source: Discover].)

Sperm retention is still a pretty popular theory, although others also have a lot of followers. The most talked-about hypotheses include:

Orgasms encourage women to have sex. The more a woman mates, the more likely it is she'll become pregnant and continue to populate the species.

One interesting piece of evidence for this hypothesis has to do with the way, in some nonhuman primate species, males kill other's young but not their own. Some research suggests that orgasms cause females to mate with as many males as possible, causing confusion as to which baby belongs to whom. Since the males don't know which kid is theirs and which isn't, they won't attack, and the orgasm-experiencing, promiscuous females' genes are passed on more than others [source: Discover].

Orgasms help women choose the best mate. Because most females don't always have orgasms during intercourse, perhaps they provide some sort of selection criteria. Perhaps at one point in human evolution, achieving orgasm during sex indicated the strength, health and attentiveness of a male partner, meaning a female could determine a mate's suitableness by whether or not she had an orgasm.

The orgasm hormone oxytocin causes suction. One of the chemicals released during orgasm is oxytocin, which also is associated with lactation, among other things. In one study, when the uterus was injected directly with oxytocin, it tended to suck up fluid. Perhaps orgasm is a selected adaptation because oxytocin encourages the movement of ejaculate into the uterus, the same end result of the sperm retention theory.

Orgasms encourage pair-bonding. Chemicals released during orgasm, including endorphins and oxytocin, tend to make mates feel closer to each other -- more connected, bonded and happy together (see How Love Works to learn about it). Evolutionarily speaking, this adaptation could cause mates to stay together to care for their children, increasing the chances of survival for their offspring.

These are all possible explanations for why females experience orgasm even though it's not directly connected to conception. One of the latest theories goes in a totally different direction, though: Perhaps there is no evolutionary reason for women to have orgasms. What's their purpose, then?