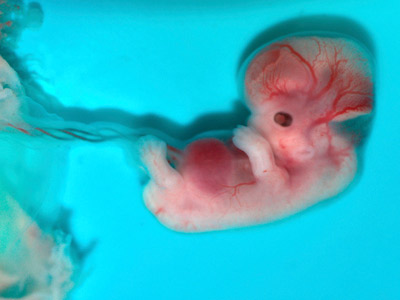 Is it a boy or a girl? In the beginning, we're all about the same down there.
SMC Images/The Image Bank/Getty Images

The big talk in the scientific community right now surrounds the theory that women have orgasms for no reason at all. It's not an adaptation. It's a wonderful accident stemming from the initial phase of fetal development.

This theory was talked about a lot in the 1970s, and it has recently been revived. The initial-development hypothesis states that women have orgasms because men have orgasms. In the earliest stages of pregnancy, the fetus isn't gendered. The hormones that determine sex haven't kicked in yet, and the nerves laid down for future sex organs in this initial period are exactly the same in all fetuses. When a fetus becomes female instead of male, it still has the nerve pathways that allow for orgasm during sexual intercourse.

I­f this theory is correct, and the female orgasm isn't an adaptation selected for survival of the species, does that mean it'll be phased out?

There's no consensus on the staying power of the female orgasm. Some say evolution tends to phase out unnecessary traits, so some day, many, many, many years in the future, females might no longer experience orgasms. Perhaps sexual pleasure, short of orgasm, will be enough to keep women getting pregnant.

Others disagree entirely: If it's true that women have orgasms because nerves associated with orgasm are laid down in the initial stages of fetal development, when there's no gender assigned yet, females will have the capacity for orgasm as long as men do. And considering how strongly the male orgasm is selected for in survival of the species, the corresponding female orgasm would be around for a long, long time.

For more information on orgasms, sex, love and related topics, look over the links below.

From ancient times at least through the 1800s, women who deeply craved sexual intercourse were believed to be experiencing a sort of madness. The diagnosis was something along the lines of "hysteria." The cure? Orgasm -- achieved with help from a skilled doctor if the patient had no (skilled) husband to treat her. An article published in The Electronic Journal of Human Sexuality in 2000 connects the development of the electronic vibrator to this orgasm cure. Apparently, it was invented partly to ease the burden on the doctor, who surely got tired during this treatment -- it could take up to an hour for a woman to climax [source: EJHS].