Sex Then And Now: The Evolution of America's Mojo

by Discovery Fit and Health Writers
Next 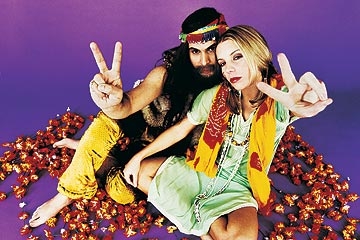 From the era of peace and love to the sexting generation of today, America's views and practices of sex have changed quite a bit.
Photo Credit: Digital Vision

We’ve been getting down since the dawn of time. The technical process of the birds and the bees hasn’t changed much, but cultural views and ways in which we take part in the act sure have. With the sexual revolution that took place in the '60s acting as a doorway to liberation, sex culture has continued to evolve and transform to this day.

Remember all those sex parties and women running around naked? Or that crazy rock and roll music and the invention of the magical, and at the time, radical birth control pill? As conservatives freaked and religious dogmas fell to the back burner, the “new” sexuality started to give way to a cultural norm that said, “Hey, sex feels good, and it's OK to talk about it.” Let's take a look at the changes in the past 50 years.

You Go Girl - Contraception and Empowerment

Many references call the pill THE ultimate motive for the revolution, but other theories state that mass media and financial independence played essential roles in the progression. As TV and radio became available to the public, and not just those of high status, so did new ideas. While men sat on their high thrones, women came to join them as more and more opportunities in the work force were made available for the female gender.

The “free love” movement that first made headlines in San Francisco in the '70s led to an even deeper public awareness of the transition to openness about sex and love. Around that same time, universities started to allow co-ed housing in the dormitories and hippies flooded the streets with signs showing their support of well, doing it.

However, the movement severely slowed in the 1980's when HIV and AIDS awareness came to the forefront and medical personnel realized that the deadly disease could be transmitted by sex.

New Developments - Are We Becoming Sexier?

As time went on, so did our sex lives, and new developments were made to America's "mojo". In a recent study by the University of Indiana, research showed that men and woman were not just having sex with one another but also performing more alternative acts of sexual contact than the last study, which took place nearly 20 years ago.

New issues have arisen within the framework of the media's somewhat relentless use of sex in advertising. There was little public outrage when the genie from "I Dream of Jeannie" couldn't show her navel, but now it's hard to flip through any TV channel without seeing some skin. The same goes for the music industry's frequent use of extremely sexual phrases. Some have coined this the “over-sexualization” of our country and have argued that it's actually creating less respect for the human body and sex in general.

Currently, one of the fastest growing, and wealthiest, industries in America is pornography. With the technological shift that has allowed it to be easily accessed by phone, video games and TV, more and more of America's youth are being shown, often violent, acts of sex.

Sexting has also altered the framework in which we view sex. As the younger generations become more and more tech-savvy, the ways in which they relate sexually to one another are changing. According to the NY Times, a recent study showed that, "20 percent of teenagers have taken nude or semi-nude pictures or videos of themselves and sent them to someone or posted them online." Laws that were set to enforce the safety of children now could leave them in federal prison for life for sending a naked picture of themselves to one of their equally underage partners.

While the U.S. still has some weird dogmas around sex, there is no changing our biological needs. Sex is Sex. Some people like it more than others, some people like it with toys included and some people like it kinky. As long as it's safe, and no one is getting hurt in the process, sex culture will hopefully continue to be supported with the good parts left untouched.