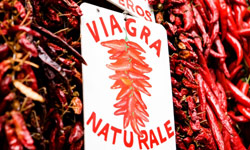 Drug Pictures From pills and vitamins to pumps and herbs, men want to believe there's something out there that will make them bigger and better in bed. See more pictures of drugs.
Hemera/Thinkstock

Guys, do you feel you're coming up a bit short in the bedroom? Do you want to satisfy your lady longer than ever? Want an all-natural alternative to Viagra? Well, we've got news for you…

Despite the billions of bytes that land in e-mail boxes across the country promising potency, better sex and increased penis size, the fact remains that it's virtually impossible to improve on what nature has given you.

Yet that doesn't stop hundreds of companies and thousands of men from trying.

Ever since erectile dysfunction (ED) was determined to be a medical rather than a mental condition in 1983, followed 15 years later by the release of Viagra, the idea that a man could take control of his erections using external means has been steadily growing in popularity. This not only led pharmaceutical companies to produce drugs that correct a man's inability to get an erection, but also inspired thousands of entrepreneurs to try to sell guys on the idea of a magic product that would help them make magic in the bedroom. The products promoted by these get-big-quick schemes were overwhelmingly "natural" in nature, as such preparations are unregulated by the Food and Drug Administration (FDA).

Unfortunately, the majority of these products simply don't work, and in some cases, contain chemicals that can't be called natural by any definition of the word.

Here, we look at five ways men could be hoodwinked into buying a product that promises to improve their sex lives.