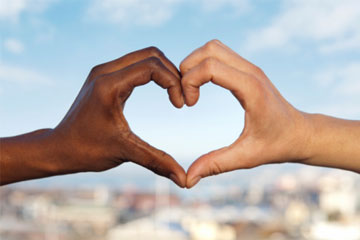 Love stays alive in the brain for the long haul.
Dimitri Vervitsiotis/Getty Images

From an evolutionary perspective, that mind-altering joy of romance ensures that humans not only will want to reproduce, but also stick around long enough to rear a child. For that reason, UCLA psychologist Martie Haselton, who studies our primal compulsions to mate, sterilely refers to love as a "commitment device," reinforced by natural selection to direct our attention toward hearth and home [source: Zimmer]. In slightly sweeter terms, the human brain -- thanks to natural selection -- processes romance like a box of chocolate.

The limbic reward system that similarly springs to action when we receive cash bonuses or sip on a glass of bubbly reacts positively to wooing someone who tickles our fancy. Functional MRI (fMRI) technology has illuminated the specific areas of the brain aroused in people freshly in love, which explain the swirl of positive and negative emotions that wash over us when we're blissfully together and fretfully apart. In 2010, a team of researchers compared that fMRI data to brain scans of people who had been married around 20 years and reported still being in love with their partners [source: Acevedo et al]. Despite the multiple years since first locking eyes, the brain activity among those experiencing head-over-heels new love and those who had been together for decades appeared remarkably similar.

When shown photographs of their respective partners, two key brain regions lit up excitedly in both sets of people: the ventral tegmental area (VTA) in the center of the brain and the nearby caudate nucleus [source: Acevedo et al]. Those structures help drive motivation and decision-making in pursuit of reward. The prize of being with their beloved refreshes people's pleasure-inducing dopamine supply in their brains. In addition, those neurological regions are packed with receptors for oxytocin and vasopressin, neurochemicals that promote bonding and monogamy.

What didn't sparkle at the sight of the long-term lover were areas associated with anxiety and fear, such as the amygdala. As mentioned on the previous page, self-reported psychological surveys and assessments denote the absence of addled obsession among people who were happily married for an extended period of time. Instead, brain sites that also promote maternal attachment lit up at the sight of a life partner, demonstrating how that obsessive early-stage love gives way to calmly passionate commitment. But aside from that maturational distinction, the primary chemicals that preserve long-term marriage -- dopamine, oxytocin and vasopressin -- are the same ones that gave us goose bumps to begin with.

For the 40 percent or so of modern marriages ending in divorce, those neurotransmitters eventually wear their welcome, and the brain's reward system develops a tolerance of sorts for respective partners -- similar to how an addict might develop a tolerance for a certain amount of drugs over time [source: Fisher]. The sizzle fizzles, sapping the interpersonal spice that initially drew two people together. Yet from a more sentimental stance, that's also what makes long-term love such a treasured bond -- it's rare to find and even rarer to preserve 'til death do you part.