Why Don't Any Diseases Increase Our Sex Drive?

by Jesslyn Shields Feb 14, 2017
If certain diseases spread more easily through close contact, why doesn't contracting them make us seek it out? CulturaRM Exclusive/Philip Nemenz/Getty Images

Diseases are just like the rest of us: They get out there every day and hustle. A pathogen's job is to infect, and if it fails to consistently establish footholds in new hosts, it doesn't survive. And like the rest of us, diseases need to evolve to compete — and every so often a pathogen happens across a great new strategy for infecting a bunch of people.

Take rabies, for example. That virus developed a way to affect its host's behavior so that the host is highly motivated to transmit the virus to somebody else — through biting the living crap out of them. That seems like a winning strategy! So why don't all pathogens influence their host's behavior in a way that will make them want to get really close to another potential host? Why, for instance, don't sexually transmitted infections (STIs) boost our sex drive to make transmission pretty much guaranteed?

Well, it's a great premise for a trashy, made-for-TV science-fiction movie, but would turning hosts into sex zombies necessarily make the disease any more successful? Possibly. But from a disease transmission perspective, pathogens are like everybody else in that they can't really choose how they evolve.

"Evolution doesn't really know where it's going," says Dr. Steve Bellan, an assistant professor at the University of Georgia's Department of Epidemiology and Biostatistics. "So a sexually transmitted infection that boosts sex drive might be good niche for a pathogen, but it doesn't mean the right mutations would likely happen that will allow the pathogen to change its host's behavior."

There are actually very few mechanisms by which this could occur. Like rabies, the pathogen could alter the function of its host's nervous system by infecting nervous tissue, or it could manipulate the endocrine system by directly messing with hormones, or a combination of the two. But assuming any of this actually happened, it would also be important for the mutation not to damage other crucial functions of the pathogen or host in the process, because detrimental mutations don't last in the long run.

"For example," says Bellan, "if a bacterium doesn't already affect hormonal or nervous systems, it is very unlikely that a single mutation that confers one of these host-behavior-changing abilities would actually do something good for the bacteria."

There's also the small matter of virulence. From a pathogen's perspective, there's a delicate balance to be struck between how infectious your host is and how long they can stay contagious. Diseases like Ebola aren't necessarily great at spreading because they kill people very quickly. Going all scorched-earth in terms of virulence results in a host who is too incapacitated and dies too quickly to go out to the bars to find somebody to take home to their sick bed.

If a disease were to up its chance of spreading to another host through close contact, why don't any diseases encourage human intimacy?
Steve Prezant/Getty Images

So, even though a dog with rabies has its behavior tampered with by the virus, the disease itself is always just barely staying afloat within a community — because for every animal that gets it, it's probably only going to manage to infect one other animal before the host dies. In West Africa, Ebola, for all its virulence, only succeeds in infecting 1.5 more people for every person who comes down with it. On the other hand, for every person who gets the measles virus, 15 others could be infected before the first person gets better or dies. It seems measles is doing OK without having to kill you right away, or passively evolving a strategy for getting you closer to other potential hosts.

So, at the end of the day, even though manufacturing sex zombies is a cool idea, many animals — and particularly humans — are pretty good at spotting abnormal social behavior. Just like you'd probably know to avoid a rabid dog if you saw one, you'd likely also give a wide berth to a sex zombie at the end of the bar riddled with Cupid flu. Probably.

Now That's Interesting
While bacteria and viruses don't often take over the brains of their hosts, some parasites have host mind control down to a humbling science.

What Does It Take to Fit Into a Nation? Speak the Dominant Language, Many Say.

Prehistoric STDs Could Be the Reason Humans Became Monogamous 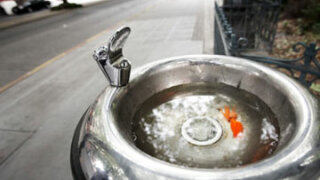